Where Have All The Flours Gone? Long time Passing.

This week I went to The Hospital to participate in a pretend ward round for the almost graduating doctors. They have a small replica ward and there were four patients and we all had a scenario to play. I was being me, with a relapse. An actor was playing a dementia patient and caused havoc all around the ward and he even ran away from his doctors!! Though the bed wasn't terribly comfortable, it was a very restful three and a half hours. I changed into my pyjamas and my next door neighbour gave me some honey bear lollies to eat. We had cups of tea and sandwiches at half time.

Last week I did actually feel quite poorly and had a couple of days in bed. Luckily one was Wednesday and we don't go for a walk, and I roused myself to take The Labradors for a walk on Thursday and then I could sleep contentedly knowing they had their exercise. The weather has been typical Spring weather: hailstorms, heavy rain, wind and then warm sunny days. No-one knows what to wear or if they should take their umbrella or not.

Hedy has learned a new trick. When she plays with Sandy, she does evasive roly polys to try and get the better of him. She is so funny, and after all the rolling on the grass also very wet. Gilly doesn't play. She likes to wander about investigating all the smells, and (I am sorry to say) eating wallaby pooh.

Gilly went to see Dr David last week and we had good news again. Her blood results were all in the normal range and this week she only has to take one blue tablet each day, and we don't have to go back for a month!! Lorelai Gilmore is so happy, she wags her tail on her walk and she is naughty at home: I caught her in the kitchen!!!! 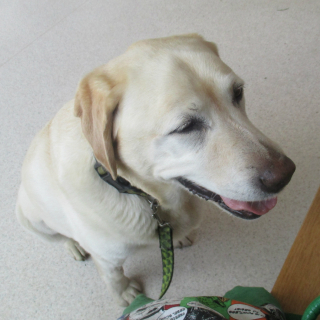 She is still very hungry all the time and likes to eat her food up on the step, so she can be higher than Hedy Lamarr. Hedy likes to try and steal Gilly's food. 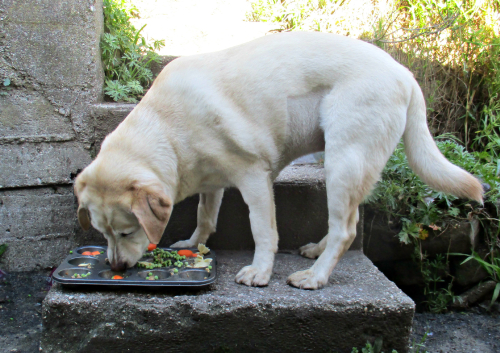 Hedy is so big now and she can be quite defiant. She knows she mustn't jump up when someone comes home, so she sits perfectly: and barks crossly. If it is later in the evening, Gilly is always waiting at the gate, but during the day they are both there. They are not allowed at the back gate because they bark at dogs going past, but if I am at the car, I let them have a special gate treat!!! 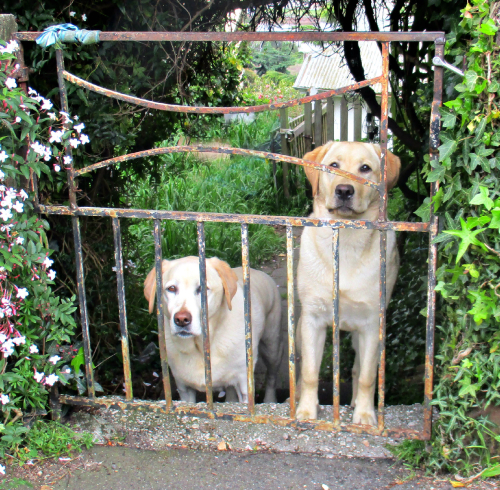 I had meant to blog last week, but on Thursday and Friday my internet was interrupted. Earlier this year I was without a landline for five weeks, and finally my ISP apologised and gave me some compensation and upgraded me to a better plan. I was very pleased, but no-one explained clearly that being upgraded meant an interruption to the internet!! It was all fixed by later on Friday, but I lost the will to bake and blog!!

Our knitting group had a Dessert Degustation. One of our number is undertaking a Hospitality course and she has been cooking with some famous chefs, like Tetsuya!!! We were lucky enough to experience these culinary delights from our talented chef: 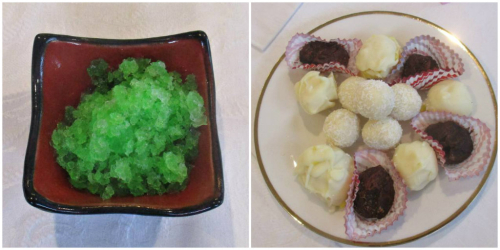 The final dessert was Tetsuya's Granny Smith apple granita with apple jelly. We didn't know about the tiny hidden apple jelly cubes so they were a wonderful surprise. This may have been my favourite. To finish we had three truffles, I can't remember what the dark chocolate one was, but the other two were saffron and cumin I think, and then a spiced rum and coconut. It was a marvellous selection of desserts and no-one had room for dinner.

Hedy has also been using food, but not in a good way. While I was sleeping she chose some plain flour from the shopping bag and then opened it and played with it, in the loungeroom, on the carpet. I am not sure how to remove it as it has set in a crusty layer. The darker spots are where she has tried to nibble the flour. She is still very much a puppy. 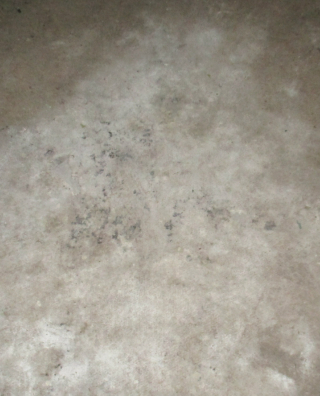 But look at her: even when she is lying in wait for Gilly half way up the steps, she is as cute as a giant button!! I think that might be flour on her nose. 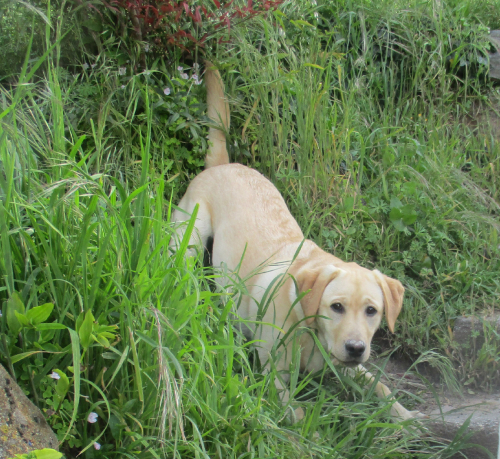 I am knitting a hat for WeeJock and Bessie's dad. It will be the Five by Five, Faith Hat and I am using some lovely soft Inca Spun Tweed in grey. I have knitted a ball of wool since lunch time and only have another 5cm to work until the crown decreases. I think I shall finish it tomorrow!! Hedy sounds like a lot of fun! Our babies are hilarious. I'm so happy to hear that Gilly is on the mend.

That video is so much fun to watch!! You can really tell they are having such a great time playing together. The desserts all looked so good!! Thanks for sharing your adventures with your adorable pups!!

What wonderful doggie antics (maybe not the flour bit though !) :D Those desserts look amazing, no wonder there was no room for dinner.
Hope you're feeling better soon xo

tsk tsk Hedy
you could at least "play" with the flour outside, less of a mess to clean up :p

hello 2paw its dennis the vizsla dog hay i am happy to heer that gilly is dooing wel i wil kontinyoo to send lots of tail wags yore way for her rekoveree!!! oh and dada sez that all the flours hav gawn to pastries evry wun!!! wotever that meens!!! ok bye

Your dogs are so funny! That flour must be a nuisance though.
I'm glad you are feeling better, and that you had those delectable-looking delicacies to try - what an excellent person to be friends with!

The white chocolate tart sounds devine. Your day at the hospital sounds like a good bit of fun. Glad to hear Gilly is better.