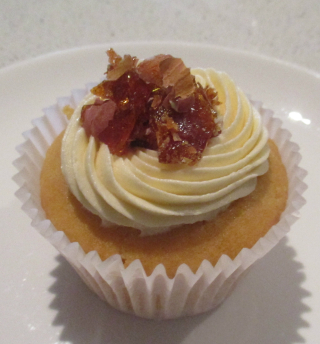 Sometimes, in a state of ennui, I can't think of anything to bake. I sent this link, The Scran Line, to my Sewing friends and they chose two cupcakes: Peanut Brittle and Carrot Cake. Since Wednesday I have made two and a half batches of Carrot Cake cupcakes and half a batch of Peanut butter cupcakes!! I did cheat and actually made toffee peanuts (which can be can be made into a praline) instead of a proper brittle. They have a hidden surprise of chocolate sauce in the centre and vanilla buttercream on top.  You can just make the peanut cupcakes and ice them with some chocolate ganache or an easy peanut butter icing, and not go the whole hog with chocolate sauce, buttercream and peanut toffee. 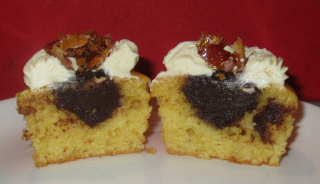 The recipe says it makes 20 cupcakes, and I halved it and it still made 12. I filled each cupcake paper with 60ml of batter. We are lucky to have quite a few brands of peanut butter which are just Australian peanuts: nothing else added.  This makes me very happy. The chocolate sauce is just melted in the microwave, it took about 2 minutes, and looks pretty luxurious.

I watched a video from The Australian River Cottage before I made my toffee. I often have bad luck with toffee, it either crystallises before it is melted or it burns. This time I just used 150g of caster sugar and swirled the pan as it melted and it worked really well. I used Australian peanuts and Tasmanian hazelnuts. MrsDrWho doesn't like peanuts so I made her some toffee hazelnuts so she wouldn't feel left out.

After I made half the buttercream recipe, (and I forgot to add the peanut butter but honestly it was fine) I bought an actual Wilton 6B tip and used it to pipe the buttercream after the cupcakes were safely at Sewing. I forgot to take a photo I was so excited at the lovely piping pattern. I am not in love with wondrous architectural buttercream toppings. I prefer a lower frosting to cupcake ratio, so I just piped a ring shape and then filled it with the roughly crushed peanut toffee.

I'll give amounts for the full cupcake recipe, along with the chocolate sauce and vanilla buttercream.

For the chocolate sauce:

For the toffee peanuts:

For the vanilla buttercream:

Preheat the oven to 180*C or 160*C fan-forced and line your muffin tray with paper cases.

To make the cupcakes, I follow The Scran Line's unusual method. It seems to work very well. Combine the flour, sugar, salt and baking powder in the bowl of your stand mixer and mix for a few minutes on a low speed until it is well combined. Then add the softened butter, I always judge it to be softened if I poke it with my finger and it "gives" a little.  Mix on low speed until the mixture resembles breadcrumbs. I also whisk the eggs into the oil while I am waiting.

Next, slowly pour the oil and eggs into the mixer as it is running on a low speed and continue until it comes together. Scrape the bowl once to make sure nothing is stuck to the bottom and mix for another 30 seconds. 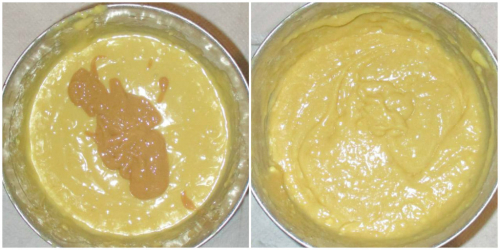 Fold in the peanut butter and the batter is ready. I put 1/4 cup, or 60ml, of the batter into each paper case and then bake the cupcakes for 25 minutes, turning the tray halfway through. 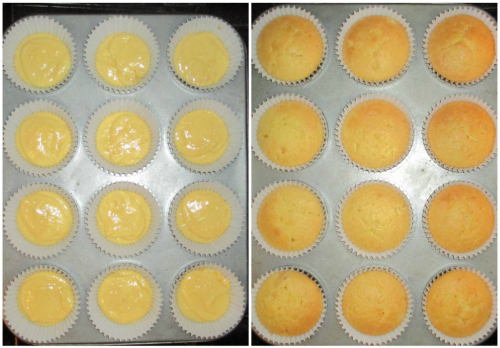 Check they are cooked by inserting a skewer into the centre and it should come out clean.  They will also be slightly golden brown on top and will come away from the edge. Allow to cool completely on a rack. 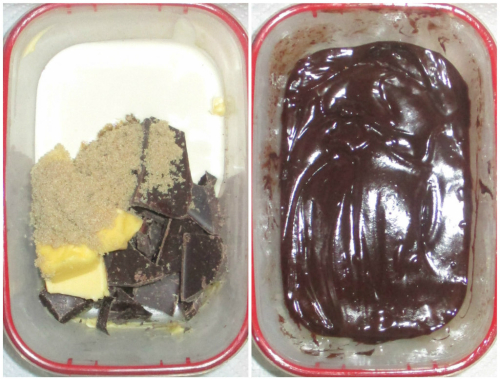 The chocolate sauce is so easy to make. Just put everything into a microwave proof container and heat in 20 second bursts on High. Stir well after each 20 seconds, especially at the start when it doesn't look like it needs it. Just heat until it is smooth and glossy. This will keep, refrigerated, for at least a week, and you can make it saucy again simply by reheating gently in the microwave.

Before I made the toffee, I roasted the nuts for 5 minutes at 180*C and then put them on some baking paper. I did try to rub off the skins, but I was tired and I gave up. I made my successful toffee by pouring 150g of caster sugar into a heavy based saucepan over a medium heat. I then stood there and peered intently, swirling the sugar every few minutes until it really started to melt. 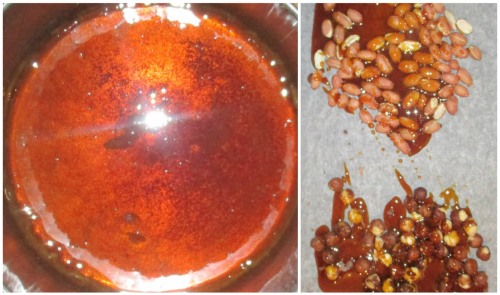 Once it was a nice dark amber colour and all the sugar was dissolved I poured it over the peanuts and hazelnuts. The toffee is BOILING hot, even hotter than that, and for once I managed not to burn myself. I did that on the oven shelf instead. It sets in a few minutes and you can crush it roughly by putting the toffee in a ziplock bag and banging it with a rolling pin. Or you can make praline using a blender.

The vanilla buttercream takes a little while to make, but it is not difficult. Put the softened butter into the stand mixer and beat on a medium speed for 5 minutes. The butter will change from pale yellow to white and it will be fluffier. The add half the icing sugar mixture and beat till it is combined. Finally add the remaining icing sugar, the milk and vanilla extract and beat for a final 5 minutes. You can add the peanut butter here, I forgot, and beat it in well. I found  the buttercream was quite soft and so I filled my piping bag and refrigerated it until it was time to leave. By the time I was ready to pipe onto the cupcakes, the icing was the right consistency. 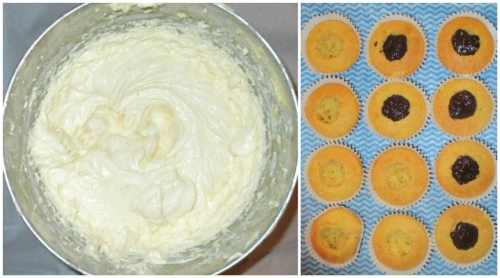 To assemble the cupcakes, first you core them. I used the large end of the piping tip and pressed down half way into the cupcake and then used a teaspoon to ease out some of the cake. I left at least half the depth of the cake so that the chocolate sauce wouldn't leak out the bottom. Fill the centre with chocolate sauce, then pipe on your desired amount of buttercream, and top with the toffee peanuts. The carrot cupcakes are lurking at the back of the plate. 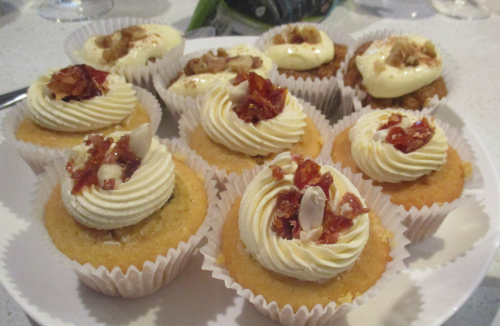 Those are lovely, and quite fancy! I have to admit, I didn't know that peanuts and peanut butter were so popular in Australia. I tend to think of them, like chocolate chips, as things that we Americans seemingly can't live without, yet which don't seem to incite so much devotion in other parts of the world. Speaking of that, I have butter to soften to make chocolate chip cookies for the kids, lol - thank you for reminding me!

They look delicious! I think I'd be fighting the cake-loving kittens away from them!