That Touch Of Sink

Yesterday Hedy Lamarr had her first swim. In truth, she had her first sink: she ran full pelt toward the ducky she spied and leaped into the water and sank like a stone. There is no documentary evidence per se as I was in will-I-have-to-wade-in-and-save-her mode. I do have "after" photos: 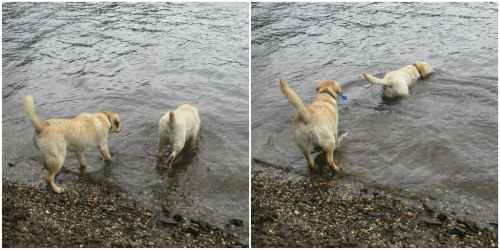 Hedy submerged totally, and after the beat when I wondered whether I would have to save her or not, she surfaced like a submarine, spluttering and dog paddling!!! I made sure to clean her ears and eyes before breakfast.

Gilly does not swim. She wades about doing a kind of canine water aerobics and gets wet up to her chin. Hedy is very vocal and is always making high pitched barks. 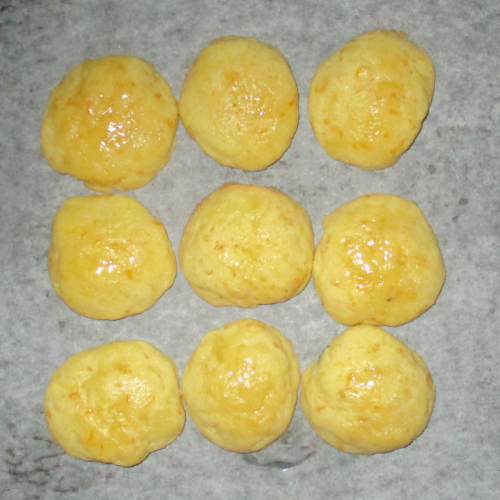 I have been poorly on and off and spent more time sleeping. Not much else has happened at our house: a little more knitting and some baking. I baked some Jamie Oliver Lemon Butter biscuits for The Vet today. They tasted lemony and buttery but they were not very pretty and I had run out of icing sugar and I just glazed them with some lemon curd. The recipe did make twenty, though it refused to roll out without sticking. I just rolled 20g balls of dough instead. 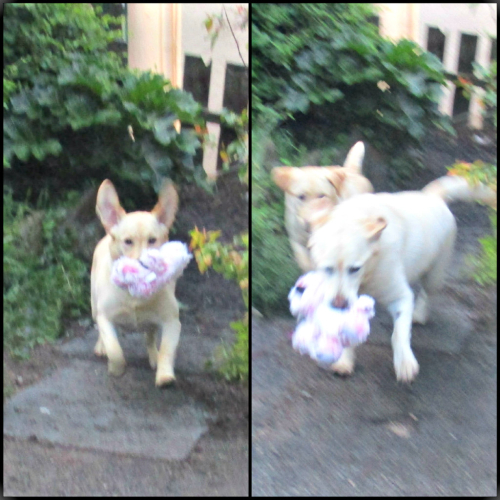 As anyone reading my blog knows, I am the world's worst photographer. MrsDrWho bought The Labradors some soft toys at her school fair.  Gilly had the toy, and Hedy stole it. Gilly is chasing her trying to get it back. To no avail.

Lorelai Gilmore is very well. She stole Hedy's treat yesterday, much to Hedy's shock and horror. Gilly is bright eyed and interested in all sorts of things out the window now. She even sneaks into the kitchen if we forget to shut the baby gate.  We go to The Vet next week for more blood tests. 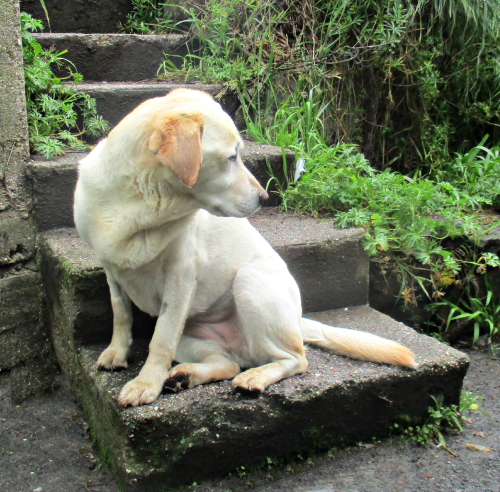 Hedy Lamarr is in denial. We weighed her at The Vet last week and she is a tad more then 23kg. Gilly is a tad under 27kg. Hedy thinks she is still a tiny puppy.

She is too big to lie sidie-waysie in her crate, or Little Box as I like to call it. She does not let this deter her. 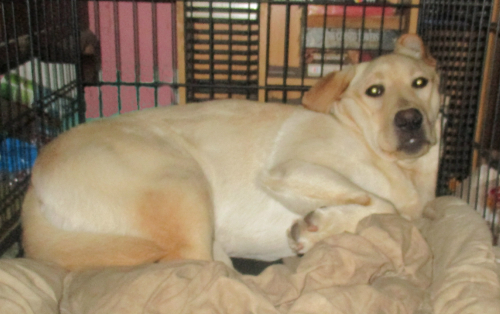 The lady at the wool shop gave me some banana passionfruit. I have frozen the pulp, mixed with a little sugar, in my new freezer. I love freezing things, I have two litres of freshly squeezed lemon juice and six take-away containers of raspberries and loganberries from MrsReno. There is still plenty of room for more frozen things!!! 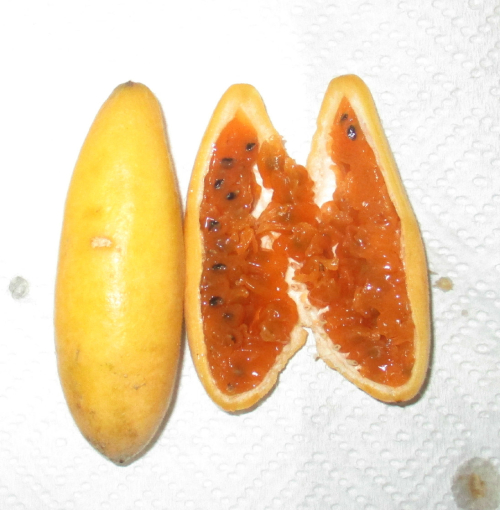 Last night I went with MrsDrWho, and other lovely people, to see Blackadder. Encore Theatre dramatised three of the Elizabethan episodes: Head, Money and Beer. It was very good, though the seats were uncomfortable. I was glad to go out as I had had a shock. I had had my heart set on something and my hopes were dashed. When I met MrsDrWho I burst into tears. After a lot of Blackadder and a commiseratory glass of wine I had things more in perspective. I did have to listen to Classic FM all day today though. I can only hope that in Australia we see what happens when a country is divided and we don't go down that path. I am glad to live here in a small city, on a small island, where in spite of all our differences, we manage to get along. Still, I Maintain The Rage from 1975, but maybe those Over There will instead maintain their hope in the face of adversity. I shall hope along with them. Together: we can. 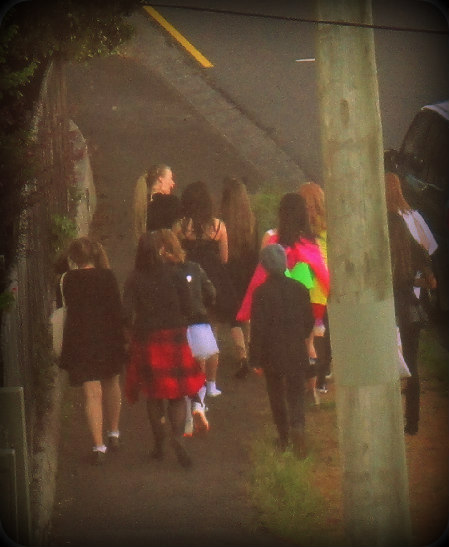 Oh and we had a Halloween here, of sorts. There was a great letter in our letterbox inviting us to participate if we wished and a balloon to tie to the letterbox to show assent. The letter also acknowledged not everyone celebrates Halloween in Australia (which is as it should be) And although we didn't participate, I feel a lot happier about it than in years gone by. The Halloweeners were all rather older teenagers and the only interruption to the early evening was their laughter!!

I used my $10 Spotlight Christmas voucher wisely, and bought four sewing patterns and a 6B Wilton piping tip for just $10. I am love a bargain. I saw 8096 on The Curvy Sewing Collective and was smitten, and not just because it is green!! I shall make the third iteration, with the wider gathered shoulder straps. Not so sure about 1102, as it is made in knit fabric, but I might give the version modelled a try. 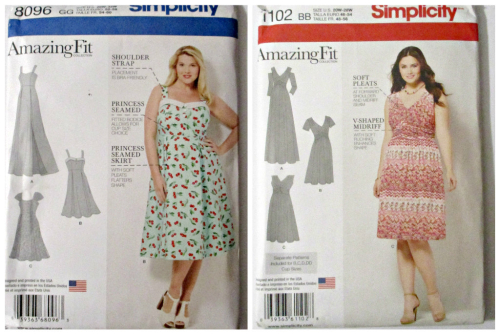 I saw 8137 reviewed as well, and I am in search of a woven fabric wrap dress, so I will try a sleeveless short dress version. I just love the skirt on Butterick 5982. I am not sure about the dart in the centre front, but there is some discussion here about a full bust adjustment in the comments. 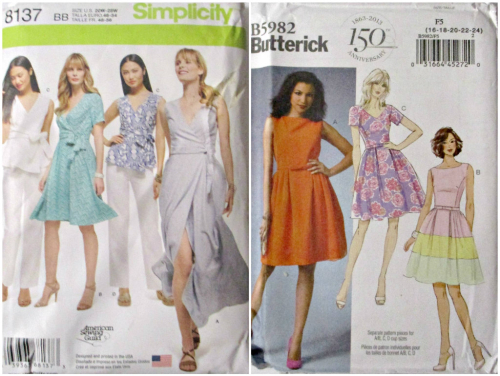 The weather is very Springy: hot, cold, frosty, snowy, rainy and wind so strong I couldn't open the car door. It has not been terribly hot, but it was hot enough that I didn't want to take The Labradors in the car for a visit to The Vet this afternoon. We are also enduring mosquitoes the size of blow flies and bulbous, loud blow flies as well. 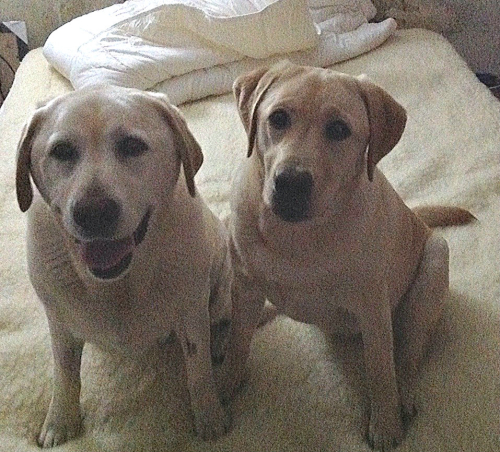 The night is coolish, but we have a new woollen underlay and a new doona so we will be snuggling under the doona and sticking a foot out of bed to cool down. My mum very kindly gave me some money so I could pick up my lay-by early. It is technically too hot for the woollen doona, but I don't care. The old underlay was so old, I had turned it already from top to bottom and in many places there was No Wool Left!! This is a photo taken in a poorly lit room with the iPad, which doesn't have a flash. After disassembling the bed, and making it halfway again, I was too tired to find the camera. Gilly looks so happy, and Hedy sits up very straight to have her photo taken and is very interested in case there might be a treat afterwards.

I have also started answering my blog comments, slowly but surely, and they are not a task or a bother. I like to answer my comments, it is just they get away from me sometimes!! Gilly is lying on the almost finished quilt (and I let her, she's sick) and Hedy is squashed in her little box, so all is right with the world. Time for bed for all Labradors.

Your girls are adorable! I didn't see your blog posts for a while, they didn't show up in my feed, and I was getting worried. But now they are back, and I'm glad all is well with Gilly! I didn't even know she was sick. Hedy is so big already!
All the best to you!

I love seeing how beautifully Hedy is growing. Gilly looks rather well now which is great. It is so nice to see her running about being cute.

I've never heard of a banana passionfruit before. It looks intriguing.

Those lovely girls make me smile ! Hope you're feeling on top of things again soon xo

The dogs are gorgeous as always.

I'm sorry you have been poorly,hope you are feeling better soon

Oh how fun are your beautiful girls. It brought to mind when we had our old kelpie Jake who never knew how to swim and didnt really love water, although loved getting a bath. We went to a friend's house who had a dam with a little pier on it, and my partner and daughter were fishing. Jake decided he wanted to sit there too and got up and fell in the dam. Thankfully he made it to the side and got out but afterwards did not go on the pier again. I hope that your enjoying the cooler weather when we have it. The mosquitoes are quite bad and huge here too, and the flies like to hang around the front door which means sometimes they sneak in and have to be swatted. I hope your dresses turn out just as lovely as on the patterns and that you can get some rest.