Bark The Herald Labradors Sing: Auld Lang Syne and Everything.

Ahhh, quickest post ever. I sat down to write my blog and the whole jolly Typepad was down: 404 error and my blog had disappeared. Kind of like we did. December was kind of lost in translation and though I wanted to blog, other things took my attention: being sick again, too many social outings and things that HAD to be done and then a mini heat wave.

I stopped saying that I was poorly to the NBN people. MrsDrWho said other people think poorly is a bit of a cold, so I used the Leukaemia word and they backed off and gave me a date for next week and stopped ringing me every day. 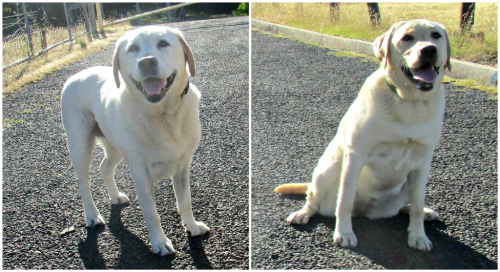 Lorelai Gilmore is exceedingly well and with much hard work and much less food this month, lost the two kilograms she gained in November. Hedy Lamarr continues to grow and is going through a The Naughtiest Puppy in The World phase. I know this too will pass, but please pass soon Naughty Phase. 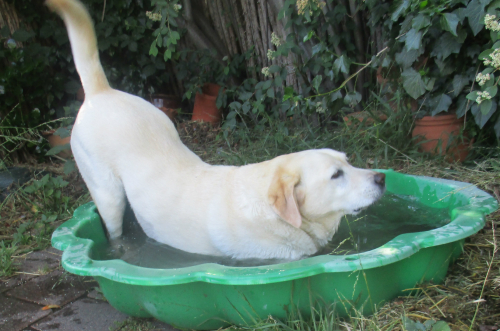 Here's Gilly keeping cool in the pool. She love the paddle pool cooling her belly. 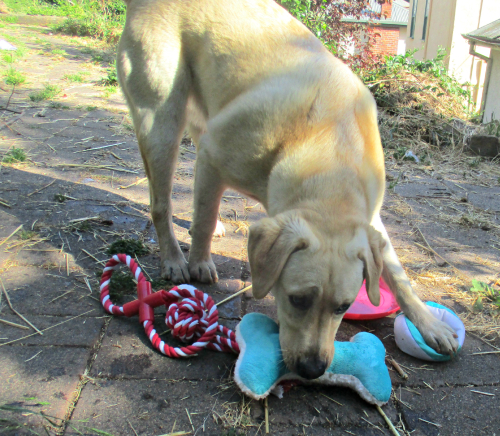 Here's just a small portion of Hedy's Christmas presents. Hedy loves Christmas, but the heat?? Not so much.

2016 was a rough year at our house and though it seems to have ended happily for us, we were sad that both Carrie Fisher and Debbie Reynolds died so unexpectedly in the last few days.

Happy New Year. (because damn, I missed the last year by "that" much)

I hope 2017 is lovely to you and your beautiful girls.

Happy New Year, Cindy! May this coming year be the best ever!

goodness how i've missed you- the dogs look really great ... and surely the 'naughty puppy' stage will eventually pass- i am always amazed by the amount of energy young dogs possess, and by just how much of that energy goes into mischief-

i wish you a happy and healthier 2017- this has definitely not been the happiest of years for many of us (don't even let me get started on the political fiasco that passed as our national elections- how sad to win a popular vote by so much and still fail to get elected- i will honor the office of the president, but i cannot honor that man)-

Happy New Year to you, Lorelai Gilmore and Hedy Lamarr. Wishing everyone a happy and healthy 2017, and a speedy transition through The Naughtiest Puppy in The World phase.

glad to see you post, but not glad you were sick again :/

yeah i dont like playing the disabled card so tend to avoid saying I have Me when things need to be done, but when it comes to getting repairs done on time, I mention it :p

Hedy looks so big! and Gilly is looking good :D

Hi CIndy and four footed friends too. glad to see you and have been thinking about dusting off my blog too. Not nice when you have to bring out those nasty big words. I hope you are on the mend super soon. Did you see Father Mulcahy from MASH died on New Year's Eve? What a year!so many nasty election results and then deaths too.
Jan

Happy New Year! I just checked in on your blog recently and was worried to see not many posts in December so I happy you are back and here's to a lovely 2017!

Happy New Year! Here's to a year of health and happiness! Joy is my watchword for the year.

Gilly in her pool has given me an idea! We have a pretty big paddle pool, as the dog who first used it loved to lie on his belly and pull himself around, as though it was deep enough to swim in, and he was swimming. No subsequent dogs, whether they were ours, visitors, or foster dogs, have done the same, though a few have done as Gilly did. I wonder if they just wanted to cool their bellies, as she did. We've got snow on the ground (and I'm on crutches) so it will be a few months before I can put this theory to the test.

I hope you and the girls have a wonderful 2017!