There will be spoilers, so if you don't want to know what happens in Rogue One: A Star Wars Story, don't click on that clicky link, and/or scroll way down to my review.

Last week I decided to give away the 100th shopping bag I sewed. And it is now 9-35pm on Tuesday 24th January and I am doing the draw right now. Hold on....

I wrote the names on pieces of paper, folded them twice, popped them in the hat, closed my eyes and drew out a name: Bloss has won!!! She will be able to take the 100th bag shopping!! 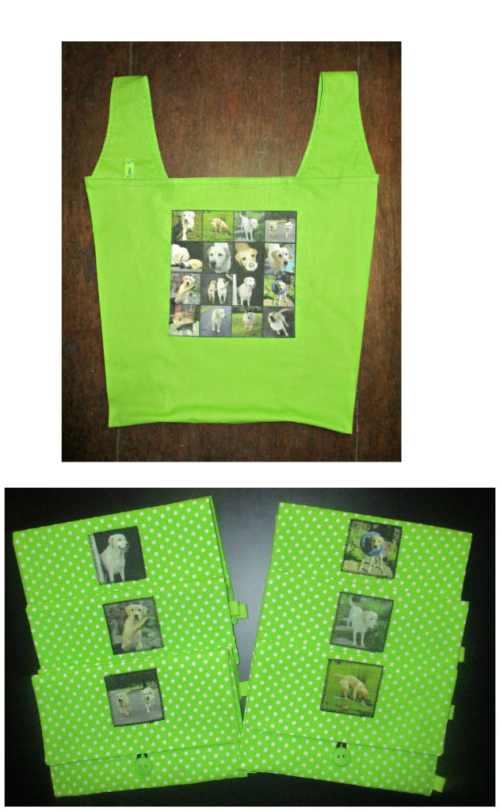 Oprah would be proud. I sewed some small buttoned pouches in my favourite, and pretty much trademark, green with a Labrador appliquéd to the front and a nice green button that closes the pouch with an elastic loop. I hope you all enjoy some Labrador happiness. Thank you so much for your kind wishes for Gilly's birthday and the 100th bag. There are eight little pouches, I thought maybe no-one wanted the back end of Labradors walking away, so there are some repeats!! I will send an email anon to everyone. Can't promise it will be tonight. 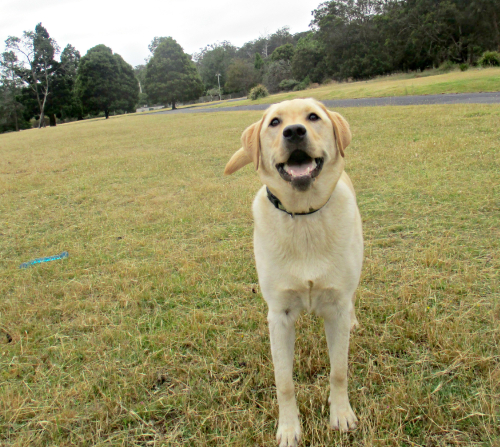 Happy Birthday Hedy Lamarr. Hedy is a big One Year Old Puppy Dog. She is so happy to be One!! Her little knees are dirty because she is such an enthusiastic stick fetcher that she skids on her knees when she comes close to it. How lovely it is to have two Labradors at our house, and it makes us very happy that they like to be together. I think, to be fair, there should be a give-away next week for Hedy's birthday too!! 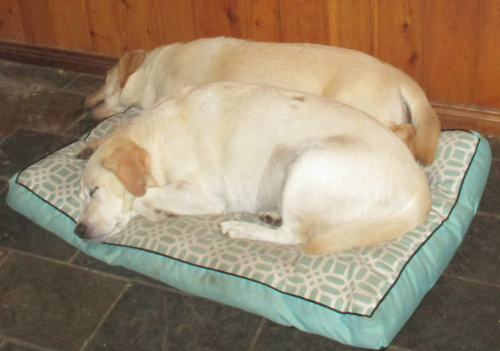 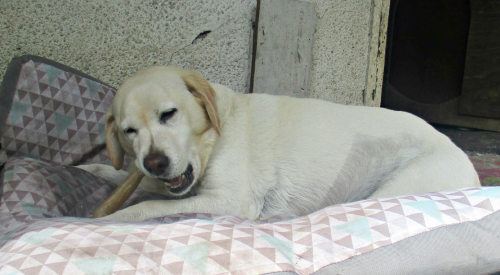 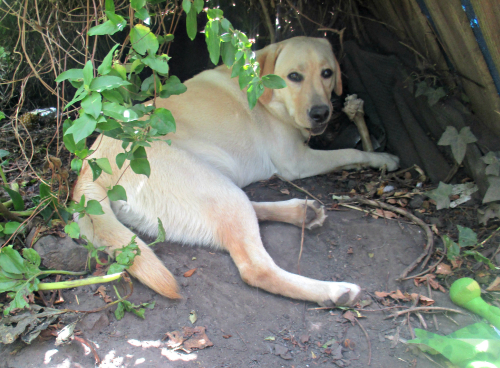 Lorelai Gilmore has been secretly spending time in Hedy's Little Box, which is what we call her crate. I came into the dining room and there was Gilly, looking very at home, if a little worried whether she should be there or not. 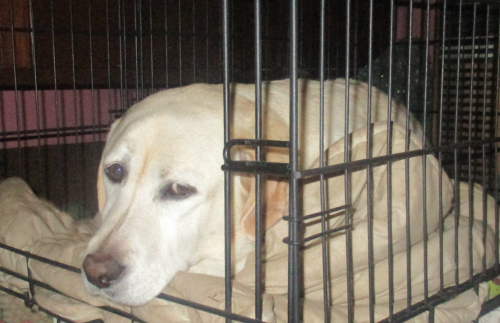 I am catching up on Christmas presents. I sewed a set of three Star Wars bags (102, 103, 104) for MrsDrWho, The gold is very gold, almost brassy and very striking.

I knitted a Pussy Hat for me. It is green, it has two tiny stripes of pink near the top. I used some Vero for the ribbing and then couldn't find the other balls and had to buy some Kureyon for the body of the hat, hence the pink stripes. Of course this afternoon I found the rest of the Vero. The hat really makes cat's ears on your head, but I could only wear it for a few minutes because it has been hot. It was 30*C yesterday.

I shall try and be restrained and not go on and on about it. I am just very grateful to live here and mindful of the "First They Came.." poem. I must speak out if I can, and saying that I don't want to be annoying sounds hypocritical, but some people are not interested or it is not high on their agenda. I like to be aware of what is happening in politics, especially when it affects women and minority groups. I can't do very much, but I vote and I like to learn all I can.

The other hat, the Markedly Striped Hat, is for MrMadcage's birthday. It is the end of the Kureyon and some Rowan 10ply. I love that it looks like I have made a lot of striping effort, but it is just two rows of plain, one row of Kureyon until the crown, where they alternate - one row of each. 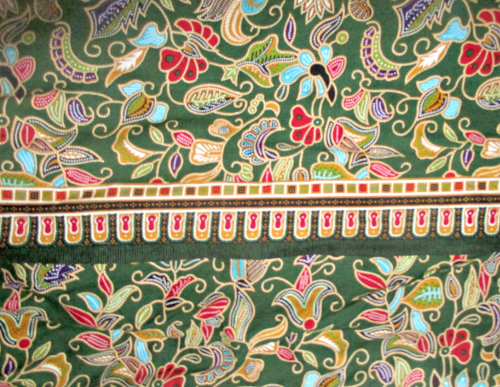 I fed MrsDrWho's mother's fish when she was away on holiday. There were nine when she left and nine when she came back: I am very proud of that. Sadly, now there are only seven. MrsDrWho's mum brought me back four metres of marvellous green fabric. It has a border on each side and it is light and airy. It will make a very cool Summer dress, which is my next project.

When it was 30*C yesterday we didn't know. After our walk we were so tired we slept till 2-23pm. When we woke up, the heat outside was terrible. Inside it was cooler, and The Labradors had the paddle pool for cooling down. MrsDrWho and I went to see Rogue One: A Star Wars Story. It was not in 3D, apparently we do not warrant 3D. Or Gold Class, even though they insist on showing all the happy Gold Class people all over the rest of the continent.

I was enthralled by the film the and the two and a half hours flew by. Also I cried at the end. Several times. It was a sad film, but war is hell and people die, even in the Star Wars Universe. I saw Star Wars, now called A New Hope Episode 4, when it was first released and this film takes place primarily a few days or weeks before Episode 4 begins. There is a lot of chopping and changing of setting and at first I had no idea what was happening, but all becomes a little clearer as the film progresses. The characters are all very interesting and there is a great diversity: human and non-human. I loved that the actors seemed to keep their natural accents, more or less: Ben Mendelsohn (Director Krennic) falls in and out of his Australian/generic world accent, as do others. I was chuffed to recognise at least two Australian actors.

The action is fast and furious and people die. Lots of people die. Many things are unexplained and maybe the stories will be fleshed out later on, or maybe they are told in some of the books. It did not matter. I am glad that the film ended the way it did, there is no more of their story to be told. But it is a worthy part of the Star wars Universe. MrsDrWho told me that there are fans who are disappointed or angry. I am neither. I love the film, maybe even a little more than The Force Awakens. There, I have said it. I like these side stories and I would like to see more, as well as The Last Jedi, which follows The Force Awakens.

It was not only a marvellous film, it also whiled away almost three hours in air-conditioned comfort. When we came out it was sultry and cooler and we had rain by 10pm. I want to see Rogue One again, it is on for another two days, I may be able to squeeze it in.

Tomorrow we are off to The Vet for Gilly's blood test. She seems well, and even a bit naughty, so fingers crossed her numbers are good. We also need to investigate a new lead for Hedy, who pulls like a train engine and it all strength and determination. And then lunch with MrsMadcage for her birthday. It will be a lovely day.

And now I am just pressing the Publish button and being damned. And spelling or grammar errors will have to wait for tomorrow to be fixed.

Such busy-ness!!! Escaping to the movies for cooler air is a double win!! I did enjoy Rogue One, didn't realize it was the 3 D viewing. Your bags are amazing--works of art. Love the pussy hat!!!

Be well and stay cool.

if for no other reason than 'beware ... it could happen to you,' i think it is important for all of us to stay informed about global news and events- i am still feeling shock and horror over this clown-car administration that just took office- watching the marchers on saturday was inspiring though- now we must maintain that momentum and hope we can eventually win back what we are about to lose- big sigh ...

once again, all good wishes to the beautiful 'birthday girl' and of course to sweet gilly as well- best regards from texas where the calendar says winter but the temperature shrieks for the air conditioner to get turned on-
barb in texas

I can't believe your 'little' Hedy is already one! It seems to have gone by so fast.

I love your new fabric and can't wait to see the new dress you make out of it.

Somehow I missed that it was Gilly's birthday! All the best to you, girl!
And happy birthday Hedy! Can't believe she's one year old already.

someone might have wanted the tail end of the dog :p you never know, seemed to be all the rage with cats a few years ago. (I never understood why someone would want yards of fabric with cat butts on them....)

You are very clever with your crafting. Happy birthday to Hedy!

I loved the new Star Wars film but I was a bit poorly and had a nap in the middle of it so I'm going to watch it again! I hope it gets cooler again for you - I also hate the heat.

hello 2paw its dennis the vizsla dog hay dada has not seen rogue wun so i am covering his eyez with my paws wile i reed this!!! i hope their is gud nooz for gilly on her blud tests and that hedy gits a nice strong noo leesh!!! ok bye