Ten Things I Eight About You 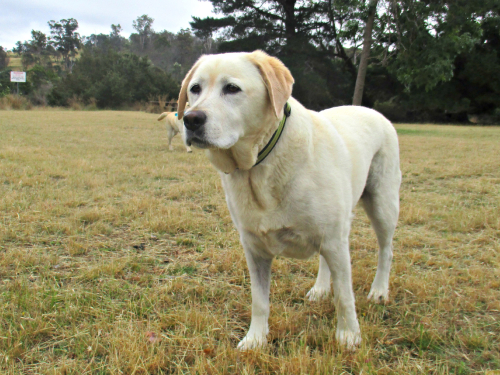 Lorelai Gilmore is Eight years old!!! There are a bazillion things I love about her, too many to list. She is such a wonderful animal companion. Gilly is loving and loyal, sturdy and true. She loves to play with disposable plastic cups and to walk between your legs and have her back scratched. She makes me laugh. I was chuffed to see that when they are home alone, The Labradors sleep next to each other in the garage. Gilly has a good companion coming along nicely in Hedy Lamarr.

We sing this song about Gilly, now she is eight. I have always enjoyed Sesame Street King of 8 for Gilly.

We are so very happy that she has kept on living after her awful immune suppressed illness last year. She is still taking all her tablets, but she is as bright as a button, full of playfulness and every alert. She is teaching Hedy Lamarr to be alert as well. Hedy is a little bit afraid when Gilly barks, and this is not a bad thing: Hedy should go lower than Gilly. It is the way of the world. 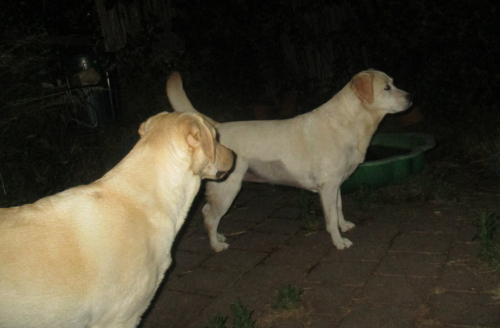 In celebration of Lorelai Gilmore's birthday and the fact that I have just sewn my hundredth shopping bag: Gilly and Hedy would like to give the hundredth bag away to someone. Just leave a comment and we will pick a winner next Thursday afternoon our time. The bag is made from some green quilting cotton and has a mosaic print of Gilly and Hedy on the front. I printed the fabric on The Spoonflower. It is a milestone, or a kilometrestone??, and now I have made one hundred bags in three and a half years the unit cost per bag for the pattern is just eight cents. That's as much as The ABC costs each Australian: Eight cents a day. I would pay more. 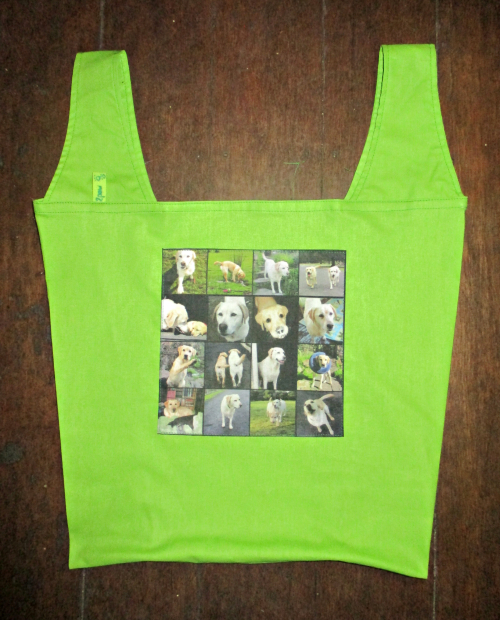 The bag is sewn, ironed and ready to post anywhere in the whole wide world. We will send it off to be used for shopping. It will do a good job. Even if you have never left a comment before, it will be fine if you'd like a chance to win!! 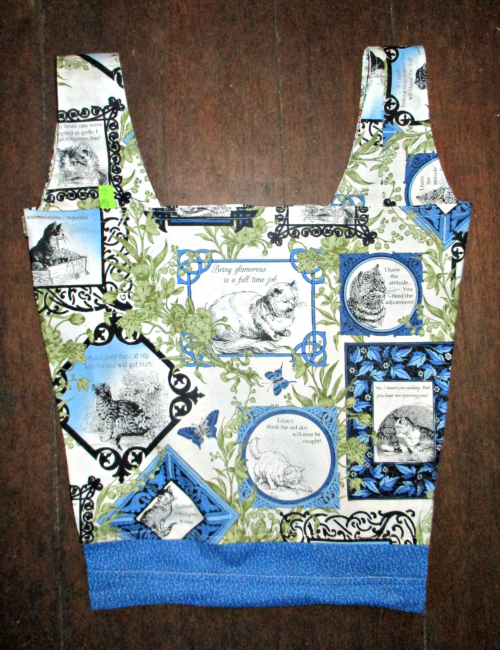 Here is bag #99, a cat bag. Though the material was cut carefully in the shop, when I tore it, it was quite wonky, and I ended up short. I used two blue jelly roll strips as an accent on the bottom. I think it looks as if it was meant to be. Roll on bag #101. 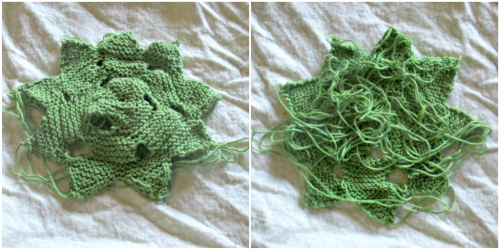 Knitpicks is sending a free dishcloth pattern every week this year. I have knitted the first: Snowflake Dishcloth. Oh the agony of soooo many ends, and sewing ends into a cotton dishcloth is my idea of hell. Still, it will be very pretty, and if I can keep it up I will have fifty-two at the end of the year. Last year I was determined to sew The Splendid Sampler. I made it through about six blocks and then Hedy arrived.  I shall knit as many dishcloths as suits me and if I miss a week, I shall employ a devil-may-care attitude.

We walked to the shop and I left The Labradors at the Dog Stop while I went to The Bakery. They waited: Gilly patiently, Hedy not so patiently. She woofed. Poor Lorelai Gilmore still has a fairly pink belly. Her fur is growing back every so slowly. 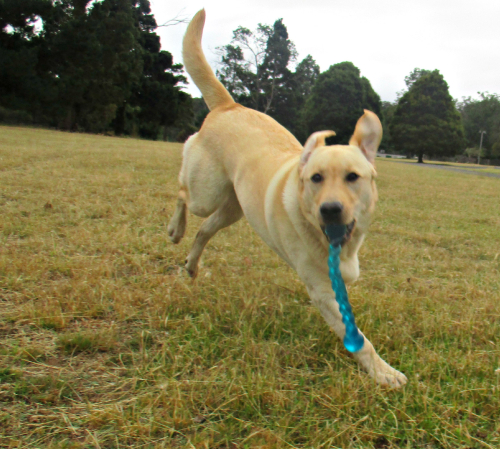 Hedy Lamarr is very athletic. She can leap and twist and turn and should be considered for The Dog Olympic Rhythmic Gymnastic team in three years!!

The new Donna Hay magazine has some recipes for icebox pies. Basically it is a base with flavoured ice-cream and maybe a topping. I made the Salted Coconut and Passionfruit Icebox Pie.

The base is 135g shredded coconut, 75g caster sugar, 25g melted butter, 1/2 tspn salt flakes and an egg-white. You mix this together and press it into the base of a 20cm pie dish and bake for 25 minutes at 150*C. I used a flan tin with a removable base. Set aside to cool.

Then Donna Hay mixes 40g shredded coconut with 1/2 tspn of salt flakes and bakes it for 1-2 minutes. It is meant to be sprinkled over the top of the icebox pie. I missed out this step as I felt it was a bit too trendy for the icebox pie recipient.

Soften 2 litres of vanilla ice-cream and fold in almost all the passionfruit. Spoon onto the base, swirl the extra passionfruit mixture over the top and then cover and freeze. Slice, top with softly whipped cream and enjoy.

We are expecting rain tomorrow, which is very exciting. The State has had to start up the gas-fired power station for the second Summer in a row. We really need some rain. I think we will cavort madly in the rain when it comes. And there will definitely be a Friday Food recipe tomorrow. I am baking back-to-school lunch box idea recipes. 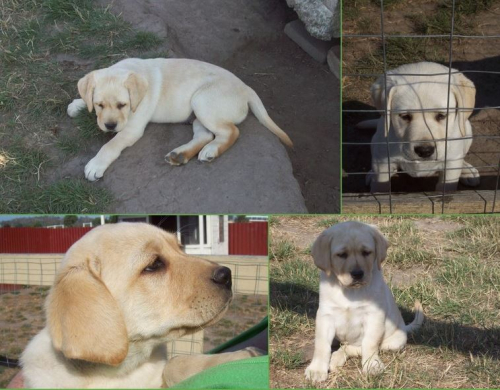 Dear Cindy, Greetings from Up Over.
please extend this message : Happy Birthday dear Gilly, you are such a grand dame!!!
I am impressed with your industry of 100 bags in 3.5 years!!!! The green is so bright and sets off the partnership of Gilly and Hedy marvellously. Thank you for always inspiring us and sharing your creativity. I love your honesty in mentioning that some things don't always go as planned. I would have thought that #99 was intended to have a blue bottom, not that the fabric was a tad wonky!! SO very glad to hear the rain is returning, if I could send you some of ours I would. Instead of snowing it has been raining. We got .6 inches or 1.524 cm yesterday and overnight. That would convert to about 5 or 6 inches of snow at about 0 degrees C(32 degrees F). or 15.24 cm, give a flake or several. No shovelling the rain though. Happy celebrations for birthdays and reaching a kilometrestone.

So lovely to see you here!

I'm amazed at all your bags. You have done very well.

I love when you blog, and always think positive thoughts when you don't. Hugs to you and your companions, being a pet mum (4 cats and 1 hen pecked dog) I know how much joy they bring.

and good to hear they are getting along :)

Congrats to you for making 100 bags, lots of sewing :)

Well done on making 100 shopping bags, both 99 and 100 look great! Thanks for the dishcloth link, though I definitely won't be making the snowflake one. All those ends would do my head in!

100 bags is quite an accomplishment- geez, 100 'anythings' is an accomplishment- i say this because i rather foolishly decided to crochet a vintage pattern tablecloth that requires the making and subsequent joining of about a trillion thread motifs- after making a really enthusiastic start on this project, i am now finding i should probably decide it is part of a '5 year plan'-

... and i might have included plans for an icebox pie during the next day or two- pie, any pie, will probably be my fatal undoing-

hello lorelai gilmore its dennis the vizsla dog hay happy ayth birthday to yoo and menny happy reeterns!!! i am glad yoo ar dooing wel!!! and oh wow rayn we hav had rayn owt the wazoo heer this yeer i hav never seen so mutch rayn in kalifornya!!! dada eeven has had to mow the lawn a fyoo times!!! i gess it is the yeer for it!!! but i do not aproov on akkownt of i do not like gitting wet!!! ok bye

Hi! Just found your blog so I hope to get to know you! I admire a devil-may-care attitude!

Happy Birthday, dear Lorelai Gilmore! You are a good doggie :)