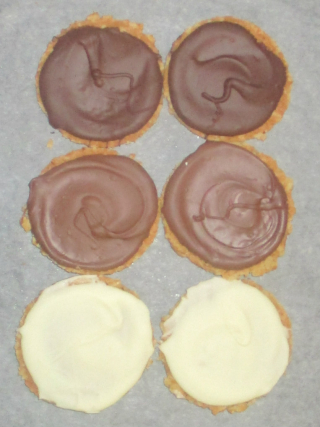 Well, time has slipped away unexpectedly. We have been tired and it has been hotter than Hades. Thankfully it was cooler today and apart from the actual turning on of the oven, these biscuits require very little effort. Hobnobs are an oaty biscuit from the UK. They are very plain, but now they are also topped with chocolate if you so desire. I made dark, milk and white chocolate Hobnobs. I tasted the white chocolate one and it was delicious. I love the oaty taste. I did put in less salt than the recipe said and even now, I think they taste salty. I try not to eat too much salt, so I may be super sensitive. I used plain wholemeal flour and added 1 1/4 tspn of baking powder. This recipe is from the March Recipes + magazine. I was able to eke out 18 biscuits. 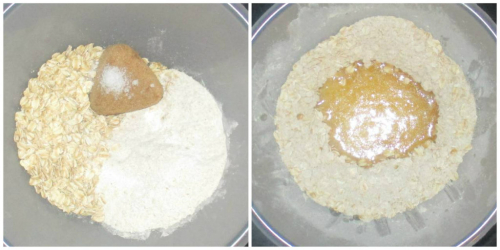 Put the oats, flour, sugar and salt into a bowl. Mix together and make a well in the centre. Pour in the melted butter.

Mix thoroughly and then add as much milk as is needed to make a dough. I used 20ml.  Form into a disc and wrap in clingfilm and refrigerate for 15 minutes.

Unwrap the dough and place it between two sheets of extra baking paper on the bench. Roll it out to a thickness of about 3mm between the sheets of paper. This will stop it sticking. It is also a weird kind of ANZAC biscuity dough and you can just take a piece from one place and add it to another and it joins in very happily. Use a 6cm diameter circle cutter, mine was 6.5cm, and cut out biscuits. Use an egg slide or an offset spatula to move them to the tray. They don't seem to spread very much at all. Bake for 12 minutes, or until golden brown. Cool completely on the tray.

When they are cold, flip them over and spread melted chocolate on the flat side. Allow the chocolate top set and you have Hobnobs!!! 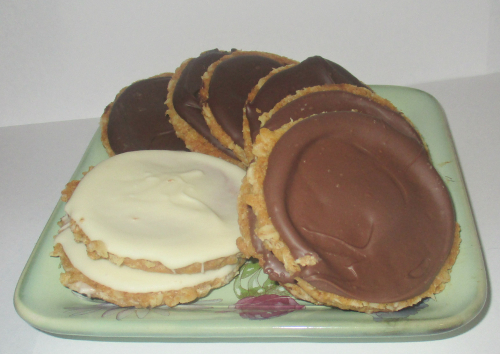 YUM! I think I need to give these a try sometime soon. Thanks for the inspiration.

I love a good hob nob!

hello 2paw its dennis the vizsla dog hay those luk delishus i wil tayk a wite choklit wun pleez!!! oh and dada keeps singing sumthing abowt how time keeps on slipping slipping slipping into the fyootcher i hav no ideea wot he is tawking abowt as yoozhual!!! ok bye

These look terrific - I'd happily eat all of them.