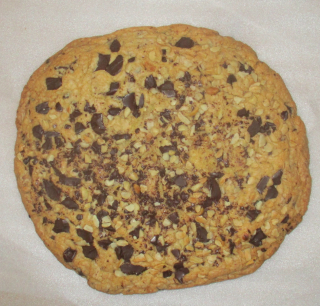 Noooo, Better Homes & Gardens magazine, you should not be publishing the August issue while it is still June. It is making my year go way too fast. But you are forgiven because you have an excellent biscuit baking section. This week I made giant biscuits.  The recipe makes two. The biscuits are melt and mix and I complicated things by making a plain and a chocolate version. I don't think the chocolate version was as successful, but I can't taste it to find out: it seems less snappy and crispy. I halved the initial melted mixture and then substituted 1 tablespoon of Dutch Processed cocoa for one tablespoon of the self-raising flour.  I forgot to add the vanilla.

I am not sure if the white chocolate is supposed to be melted, but I don't think it is, otherwise it would have been melted with the butter. I used white choc chips and a good bar of dark chocolate. The only macadamia nuts in the supermarket were already chopped into smallish pieces. I kind of prefer larger chunks really.

My oven trays are 28cm wide and I traced a slightly smaller circle on the back of the baking paper so I could make the biscuit roundish. And that's it: easy to make, quick to bake and they look very impressive and the plain biscuit has a lovely golden edge.

Preheat the oven to 200C or 180 fan-forced. Line two trays with baking paper. I traced a circle on the back of the paper to help make more circular biscuits.

Put the sugar and butter in a bowl and mix with the white chocolate. 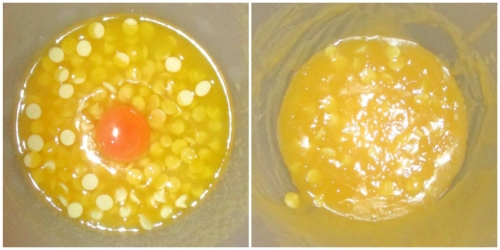 Add the egg and mix till combined. 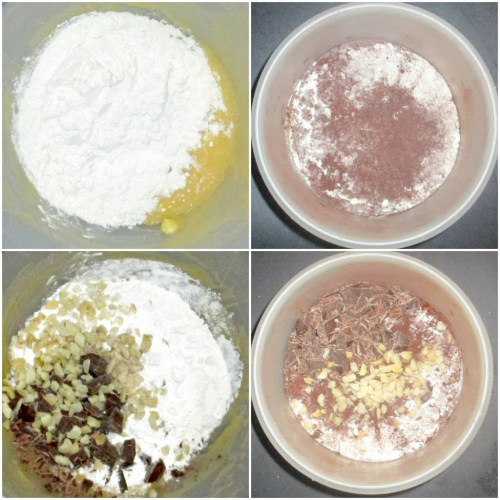 And from here I halved the batter and made half plain and half chocolate as explained at the top. Add the flour, bicarb and half the dark chocolate and nuts. Save the other half for the topping. 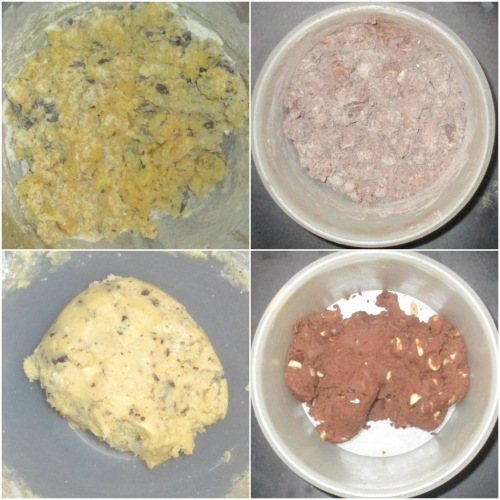 Mix to a dough. I ended up using my hands to bring it together.

Form a disc and then press out into a circle on the baking paper, it should be about 1cm thick.  Sprinkle over the extra chocolate and nuts and press gently but firmly so they stick on top.

Bake for 20 minutes, I swapped the trays and turned them half way through. Cool on the tray. The biscuits will keep for a week in an airtight container, or freeze for 3 months!! 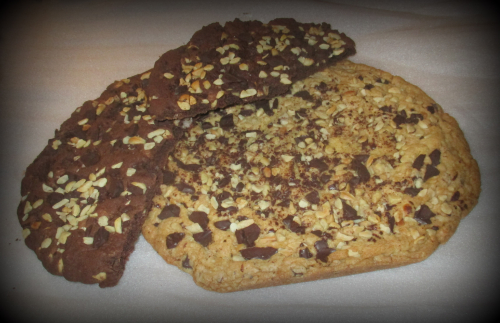 hello 2paw its dennis the vizsla dog hay that jiant biskut luks verry verry taysty!!! altho dada sez i cud not hav enny on akkownt of macadamia nuts ar not gud for dogs but he is always saying stuf like that i think he just wants it all for himself!!! ok bye

Oh, those look so tasty! We're in summer now and the heat and humidity are upon us, so I find myself fantasizing about a cool day when I can do some baking.

Yummy they look amazing! (and big!!)