Labradors eat anything. Literally anything. And The Labradors at our house have eaten pretty much everything they shouldn't. Last week Hedy ate most of a tea-towel. I absent-mindedly hung the tea-towel over the baby gate to the kitchen, instead of on the oven handle. There must have been biscuit on it, because I had used it to take the giant biscuits' tray out of the oven. 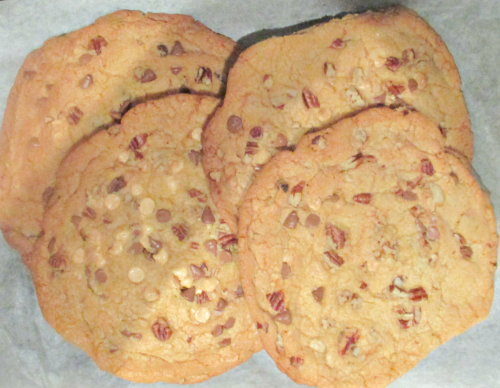 When I came home, I wondered what on earth was lying in the mud near the fence. Yes, it's the end of the tea-towel as we know it. I kept an eye on Hedy for the next day or so, but it didn't seem to have any ill effects. Thank goodness. 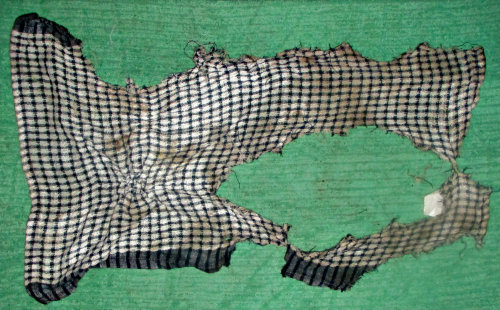 We had such very good news today at The Vet. Dr Gary gave Lorelai Gilmore her blood test and she has a platelet score of 50. Which is excellent. I think it has been 35, then 38 the last twice. She still has to take her Imuran, but we don't have to go back for three months. We are ever so grateful to all the doctors and nurses for taking such wonderful care of Gilly. She has a blue bandage because her leg bled a little, it stayed on for just an hour when we came home. She is very happy. 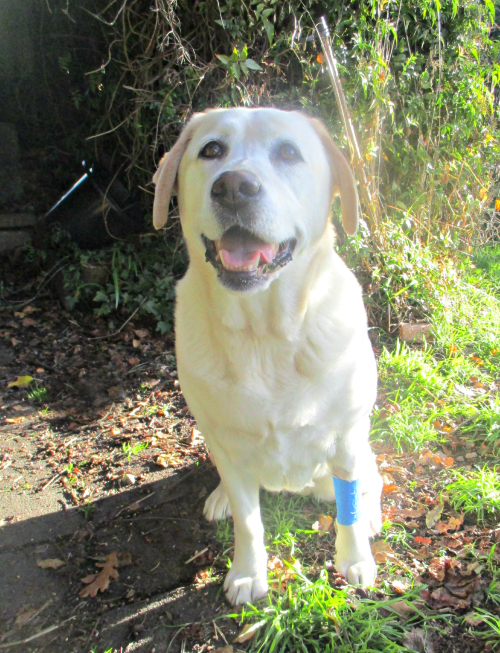 I am extra absent-minded because my mum came to stay and we did so much over the three days that I have spent a week in bed recovering. It was so lovely to see her and we spent time shopping, chatting about knitting, doing crosswords and practising her Ipad skills and dining in and out!! Mum came for a walk one frosty morning and Hedy was so excited she almost turned inside out. Gilly was sure Mum had a treat in her hand (she didn't) and spent the first half of the walk trying to inveigle the treat away. 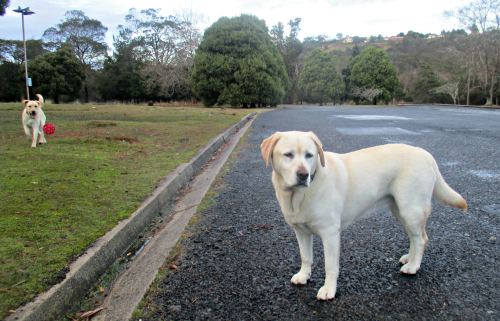 One of our neighbours has chickens and we benefit from the eggs every now and then. Last week I looked over the road and at Not-The-Chicken-House, there was a chicken on the front patio!!! 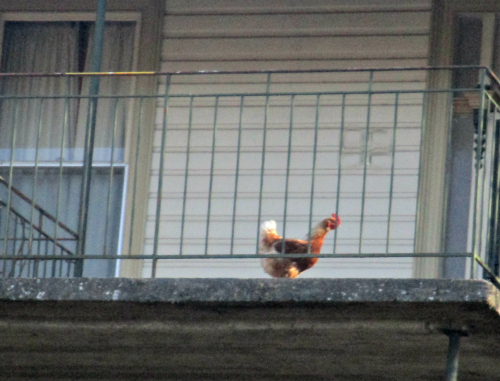 There has been very little crafting. Poor MrsDrWho is once again waiting for birthday presents because my life has ups and downs. I am making a Star Wars Character wall hanging. It is meant to be paper pieced and quilted. Instead, I used Heat & Bond Lite to stick the pieces in place and then puffy paint to seal the edges. Also, it has some muddy paw appliqué from guess who? Hedy. 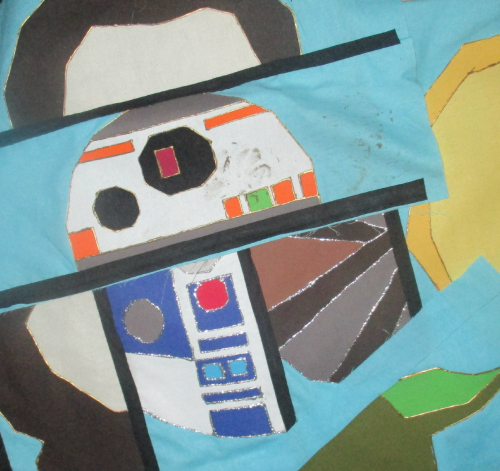 Today I sewed finally sewed the pieces together and basted the wadding to the back.  Not much farther to go now. 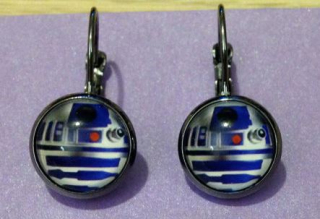 I bought MrsDrWho some Star Wars earrings from BooKittyBootique on The Etsy. All the earrings are lovely, I bought some aqua ones for me and an excellent R2D2 pair for MrsDrWho. As I was wrapping them up I somehow hit the end of the cutting board and one pinged its way across the room into oblivion. I sent a message to BooKitty and not only did she offer to replace the earring, but she sent another pair and they were hand delivered!! I can recommend her Etsy shop.It was so kind of her and I very much appreciate the extra effort and thoughtfulness. MrsDrWho loves her earrings and earring story. 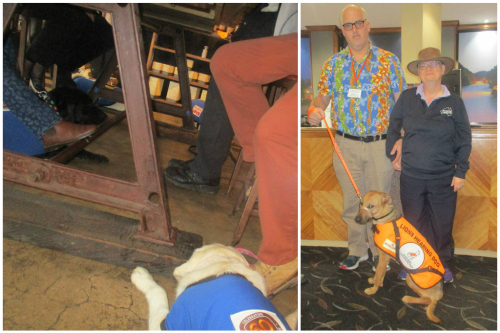 I have met some wonderful service and working dogs lately. I went for lunch with Auntie Dutch and we found ourselves next to a Guide Dogs In Training outing. The dogs were all so happy to see each other and they (mostly) waited patiently. The lovely golden Labrador next to me wriggled closer until she was secretly touching my foot. I resisted patting her as she was working. I went to the Council Chambers and met a newly trained Hearing Assistance dog. I've seen him out working as well. His humans were waiting for approval to come through so he would have the same rights as a Guide dog. His humans were happy to be in the photo!! 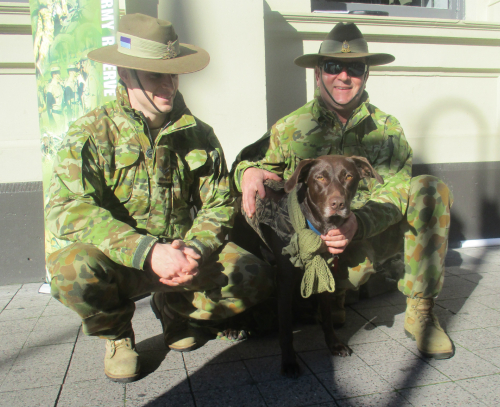 I met Alice the Army Reserve recruiting dog in the Mall. The recruiters hoped that if people stopped to pat her they might be interested in joining the Reserve. MrsDrWho and I assured them we would not be signing up!! 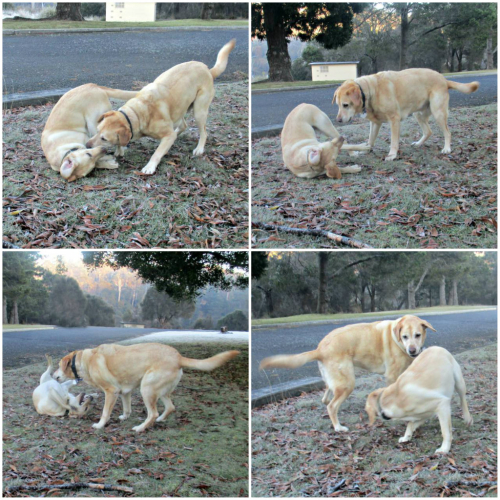 Rafa The Border Collie is away and so Hedy has decided she will play with Sandy. Sandy is almost thirteen, but he plays like a puppy. Lorelai Gilmore will only put up with so many shenanigans, and she makes sure everyone is playing sensible. 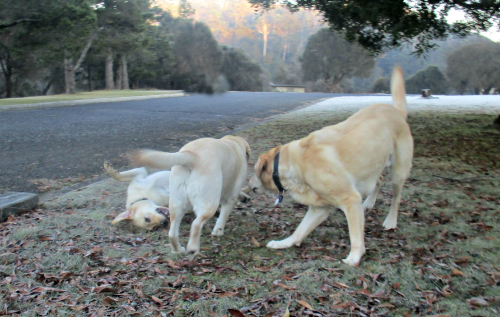 Hedy loves to play with her Billy Ball. On Monday we accidentally left the ball at home. It was a very traumatic walk for Hedy. I made a special effort to remember Billy Ball on Tuesday and much joy ensued. And when Hedy Lamarr wants to play, she wants to play now. 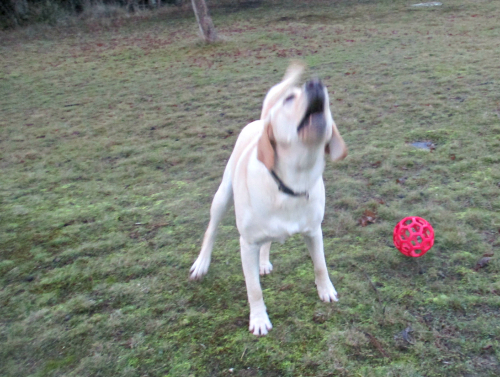 I have a new Winter coat. It is not new, it is from the posh St Vinnies' shop in town. My next door neighbour was walking past with me and insisted we go in. I protested I could never find anything in there. She proved me wrong. It is a Junior Look green coat, 80% wool, 20% nylon, fully lined, with pockets and it cost the grand total of $18. Of course it won't do up over my upper nether regions. I was experimenting with a kilt pin here, but I just wear it open and if it is deathly cold (as it has been, it was -5*C overnight twice) I wear a scarf. 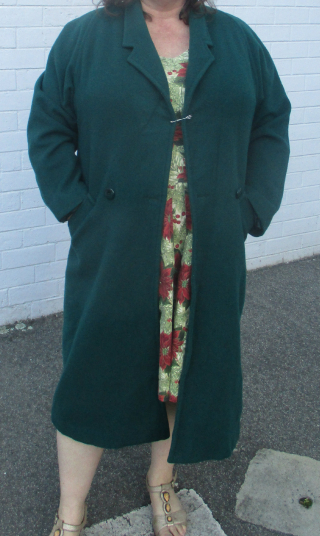 When it is -5*C, the water on top of the buckets outside freezes and so do all the puddles at the dam and the grass. It is a Labrador Winter wonderland. 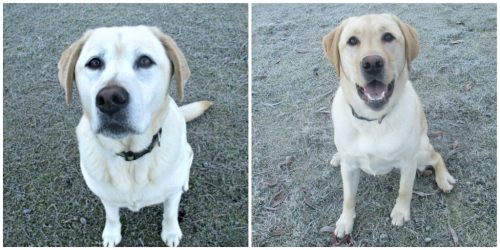 Well, not much happening, but we still have lots to tell!! There will be Friday Food, in fact I have two Friday Foods.  I am one ahead now, which is handy.

that is great news about Gilly :D not so great about Hedy and the tea towel :p

Its always so hard to not pet assistance dogs lol but I know they are working so refrain :p (I never pet a dog without asking)

The coat looks good, I never close my coats even tho they do fit, just easier to get out of

Lovely to see those happy faces and good to hear you're feeling better :)

Loved reading what is happening in your life, and that coat was such a bargain.

hello hedy its dennis the vizsla dog hay mmm dish towel!!! my brother tucker the other vizsla dog always yoozed to like to lik the dish towel i do not think he ever ayt wun tho!!! i think eeting the towel is a gud way to mayk shoor yoo hav a towel wen yoo need wun becuz like it sez in the faymus guidebuk the hitchhikers guide to the galaksee it is verry importent to hav a towel handy at all times!!! gilly i am glad to heer yoo ar dooing wel yoo do luk verry happy and happy is a gud thing to be!!! ok bye