Well that was an unexpected turn of events. I had a ride in an ambulance, a couple of days in hospital and some plastic surgery: no new nose or perky breasts though. 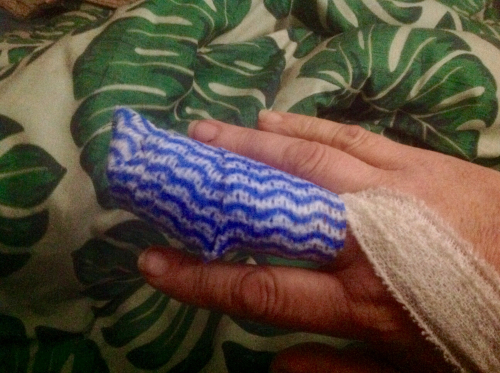 I have left handedly sewn some kitchen cloth over my bandage in an attempt to keep it somewhat clean.

Late Friday afternoon Hedy Lamarr stole a pig's ear from the shopping and was eating it in her little box. I put my hand in her mouth to extract said pig's ear and she chewed down at the same time and accidentally chewed my finger. There was no malice on her part, no pulling or tugging, it was just an accident. I have put my hand in dogs' mouths for twenty-eight years and never been chewed before.

Her tooth went through the centre of my middle fingernail on my right, and dominant, hand. It was like taking a well roasted carrot and pressing your finger into it. There is a hole, and the edges of the carrot split: I did worry I would lose the end of my finger.

Our wonderful health system kicked in. Neighbours rang the ambulance and applied pressure and held my arm up. Dion the paramedic put on a dressing and then took me to the Fast Track Emergency. They cleaned me up and I saw a doctor and a plastic surgeon. I was bumped by a young man who had punched a window and broken a hundred bones in his hand, and by 9pm I was in a bed on a ward.

The worst part of the whole thing was not eating from 2pm Friday until 9-30pm Saturday. I had the best sandwiches in the world, saved from dinner by the nurse. I had talked about sandwiches all day. No liquids either, but I had three bottles of antibiotics and a litre of fluids through my cannula. The nurses, doctors and ward staff were wonderfully caring and made sure I was as comfortable as possible.

The next door neighbours looked after The Labradors. My friends came to visit and I dozed on and off. When they finally took me to the operating theatre, the plastic surgeon decided she could operate using a local, rather than a general, anaesthetic. Apparently I am brave. No one realised I had only have two paracetamol until Saturday morning, I just put up with the throbbing, I thought it was normal. When they gave me some Endone the pain went straight away.

The surgeon didn't need to remove my nail, she just stitched the top half on to protect the nail bed, stitched the nailbed and finger closed and Bob's your uncle, it was over.

MrsDrWho brought me home and The Labradors were more excited to see her than me. My friends brought me so much food the fridge is too full and I had to freeze a quiche and some homemade soup. Hedy was afraid of my hospital smell, but Lorelai Gilmore took it all in her stride.

I am allowed to drive if I forgo the drugs, so we went for a walk this morning and now we are back in bed, full of drugs, and ready for a day of sleep. Oh and a month or so of no knitting or sewing or legible writing. And showers with numerous plastic bags and sticky tape.

An awful thing happened, but in the end it was all sorted out and not so bad. Accidents happen and you can't change that. I am grateful to have wonderful family and friends and live in a country where there is free health care. I don't have to pay a cent for my stay or operation as far as I can tell. 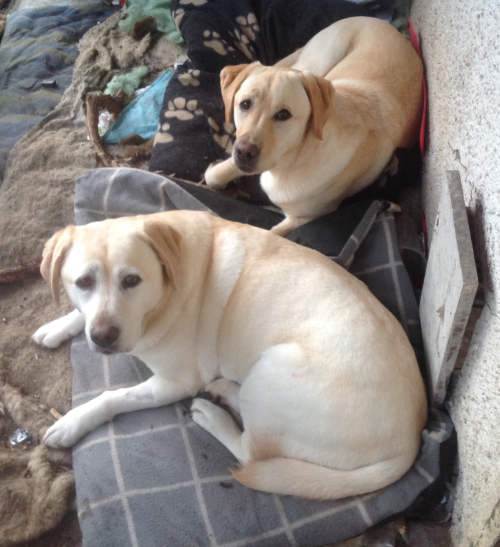 Gilly and Hedy outside the back door. Hedy has "opened" one of their beds, collected some sticks and chewed her red placemat. Gilly is just a good girl.

Posted at 11:48 AM in Boogelly Things, Special Happenings, The Labradors | Permalink | Comments (8)

Im so sorry you were hurt but I'm glad you were so well looked after.

Sending you many good wishes. I'm sure Hedy's puppyish enthusiasm will abate. Claude bites me softly from time to time.

glad it was fixed and yes accidents do happen, could have been worse you could have ended up with a perky nose or new breasts.... O.o ow bit on the boob

Brave soul!!! Kudos to your dear friends for their love, care and food. Kudos to your health system, you do not have to go bankrupt over an accident. Sorry you have to lose your dominant hand for a bit. If you can find stretchy hair elastics they will keep the under plastic bag in place for a wash up. (The voice of experience from May & June) feel better, hugs all around.

Dear Cindy
So sorry to read of your accident. Wishing you a good recovery. Poor little Hedy Lamarr, she probably does not realise what has happened.
What wonderful friends indeed to come to your aid!
Take care.

hello 2paw its dennis the vizsla dog oh hay wow owtch that must hav hurt!!! i am glad yoo ar home and i send tail wags for yore speedy reekuveree!!! my dada sez we cud yooze sumthing like yore helth kayr sistem heer but he hasnt got enny grayt hopes it wil ever happin!!! ok bye