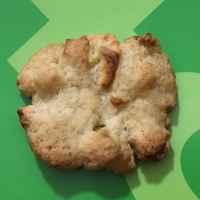 I was reading some comments on a YouTube video where people were cross if they searched for a recipe and the person posting the recipe had things to say before the recipe. This is one of those posts, so skip ahead if you want just the recipe!!!

My finger, chewed by Hedy, is healing well. I shan't put a photo, because it looks awful, but it is doing extremely well. It still hurts and I can't properly write, brush my hair, use keys in locks, bake, sew or knit. But I am getting there.

My iPad broke. The wifi antenna broke, and it would cost $420 to fix it, or $469-ish to buy a new one. I had to wait a fortnight, but I used my birthday money to buy one. MrsDrWho lent me one of her old iPads that she had taken to use at school. I am very grateful. My new iPad is silver and white and all shiny. I also have a military grade(?!?!?) cover to protect it from Labradors.

Yesterday my computer went for its yearly service and they found it needs a new hard drive or something or other. I am not exactly sure, they did tell me, but I am still a bit swirly in the head.  I still have some birthday money and whatever happens, I have backed up and they can access all my data.

So that is three things: finger, iPad and computer. I firmly believe that major appliances, and/or body parts now, know when your tax return is coming and they choose that moment to break down. Thank goodness for birthdays!! So I am blogging using my iPad, so please forgive any strangeness, well any more strangeness than usual. I also had a bit of trouble replying to comments, so please, bear with. 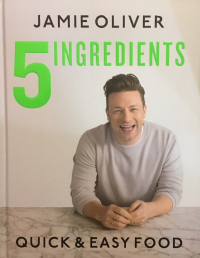 And now to the recipe. I bought the new Jamie Oliver book for Uncle Dutch for his birthday. I couldn't finish his hat (finger) but I made some Butterscotch Schnapps Boozy Fudge. I had a flip through Jamie Oliver 5 Ingredients and chose the Apple Crumble Cookies. I haven't really baked so this was my first foray. The recipe is exceedingly easy, not so easy because I didn't use a food processor, and of course there are only 5 ingredients. I couldn't buy raw caster sugar anywhere, so I made my own by mixing half and half raw sugar and caster sugar.

I baked the first batch of biscuits at 200*C for 10 minutes but the dried apple pieces on top caught. I baked the second batch at 180*C for 8 minutes and also flattened the biscuits a little more. They turned out well, and I didn't bother with the extra dried apple on top.

The biscuits do taste apple crumbly, and are very moreish. They are quick and easy and really did make 24 as promised.

Preheat the oven to 200*C or 180*C fan forced and line two trays with baking paper. 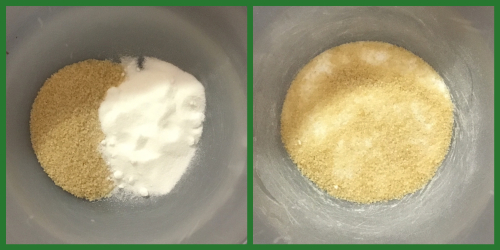 If you can't buy raw caster sugar, make your own by mixing together 50g of raw sugar and 50g of caster sugar.

Add the cubed butter, self raising flour and a pinch of salt, and rub into the sugar until it resembles fine breadcrumbs. Finally add the dried apple.

Make a well in the centre, add the egg and then mix. I brought it together and kneaded it with my hands. My dough weighed about 480g, so it was easy to divide it into 24 balls, each 20g. 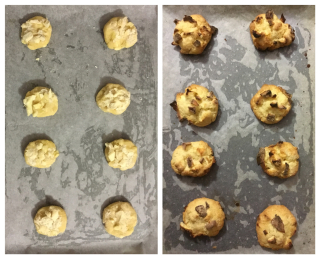 Flatten each ball into a 4cm diameter biscuit. Press into some extra chopped dried apple. This is the first tray I baked. The dried apple caught. 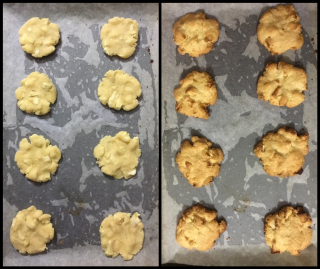 I recommend really flattening the biscuits and then baking them for 8 minutes at 180*C in a fan forced oven. Cool slightly, and then place on a rack to cool completely.

The biscuits should keep for about a week in an airtight container. I ate mine with a cup of tea  and Gilly and Hedy had one each when I knocked the first tray of biscuits on the floor!! 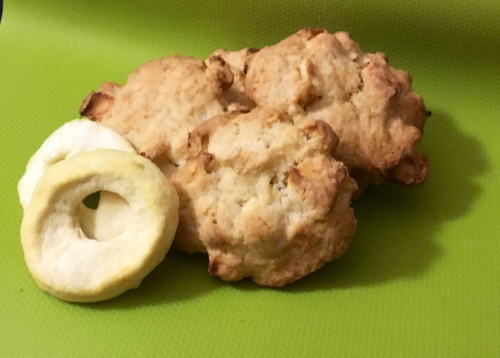 To make the recipe the recipe using a food processor, whiz the dried apples until finely chopped and then add the cubed butter, flour, sugar and pinch of salt. Process for a minute until a fine crumb is formed. Add the egg and pulse until combined. Scrape down the sides as needed and continue on as in the recipe above, rolling balls of the mixture to make the biscuits.

I accidentally pressed Publish prematurely, so I had to go back and add this part in.

Dear Cindy, these bikkies sound delicious! I happen to have some v nice dried apple in the pantry so your timing could not be better!
I am sorry to hear that Hedy was abusing you, and sorrier still for the ongoing inconvenience on top of the painful event! I hope that playing with a shiny new ipad is helping somewhat.
XX Kate

Me again - I made them today, used half Turkish dried apricots and half dried apple, added a dash of cinnamon, and they were lovely! All children have expressed approval, the dog remains woebegone at the lack of any for her. X Kate

So pleased your finger is healing well.

Such a nuisance when one tech item stops working, but two .. that's no good at all! So good you had some Birthday money in reserve. Does this mean you have recently had a Birthday?

Your biscuit recipe looks delicious. I don't bake much any more. The Princess bakes now. She loves cooking and sends me photos of what she has made. The latest is colourful meringues with hundreds and thousands (sprinkles). The twins enjoy making cookies, letters are their favourite shape at the moment.

hello 2paw its dennis the vizsla dog hay wow that is a lot of stuf to go rong at wunse but sinse things go rong in threes i think yoo ar rite and yoo ar dun with sutch problims for a wile!!! i am glad yore finger is dooing better!!! ok bye

I thought I had commented on your last post, but must have passed out while reading it! So glad your finger is improving.
Ugh, bad things do seem to come in threes. I had to have my computer hard drive replaced in June. Since my laptop was not yet two years old it made sense to replace it rather than buy a new one (which it seemed like the computer guy wanted me to do). But it is working just fine now.

Wow, sorry to hear about your finger. Bad things come in threes they say, so you must be done. These cookies sound delish - who can resist apple crumble in any form.

I've seen that book around - thanks for posting something out of it as I was curious.

I'm glad to hear the finger is on the mend. Sorry to hear about your IT woes.