I found this recipe in the September BBC Good Food magazine, through the Zinio for Libraries app. I liked this recipe because it could be made without any electrical mixers. Basically you cream butter and sugar with a spoon, or spatula in my case, and then mix in the rest of the ingredients and bring the dough together with your hands. It is a version of the Italian Baci, or kiss, biscuits. They are usually made with hazelnut meal, but these substitute almond meal and add chocolate. They are called Lady's Kisses.

The recipe made 100 individual biscuits and 50 sandwiched together. I was quite scrupulous and used a measuring teaspoon. The recipe says you can make 40 sandwiched biscuits. I found that 15 minutes was plenty of time to cook these, perhaps because they were smaller as I made 100 instead of 80.

I really like the idea of putting the melted chocolate for the filling in a piping bag, though I used twice as much chocolate as the recipe said. I just snipped the end and it was a snap to swirl on the chocolate. I think these would also be nice with a little ganache and maybe some orange zest for something different.

These biscuits would keep longer un-filled, and I think they could be frozen that way too. Otherwise keep them for up to a week in an airtight container.

I am posting from my iPad again. The computer is working well, but I seem to need much more rest as I am healing my finger. So blogging from the iPad it is!!

Line two trays with baking paper and set aside. You do not need to preheat the oven at the beginning as the biscuits need to chill in the fridge for 30 minutes. I turned the oven on when I started rolling the dough to make the biscuits after they chilled.

The butter should be soft enough to squish when you poke it with your finger. Beat the caster sugar and butter with a wooden spoon until it is creamed. This should only take a minute as the butter is soft. 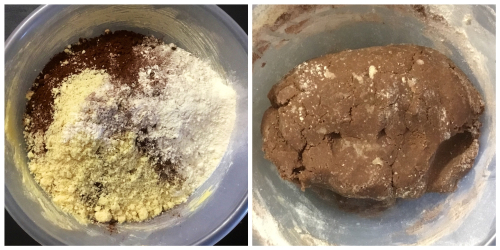 Add the plain flour, almond meal and cocoa and mix well. It will be quite crumbly, but it is easy to bring together with your hands to make a dough. 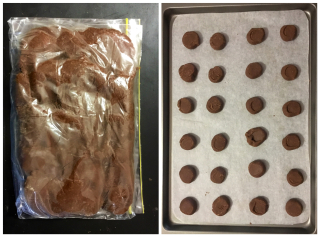 Flatten the dough and wrap in cling film or place in a ziplock bag. Refrigerate for 30 minutes. At the end of the chilling time preheat the oven to 180*C or 160*C fan forced. Roll teaspoons full of the dough into balls and flatten slightly when they are on the tray. The biscuits don't spread very much.

Bake for 15-20 minutes. I swapped and rotated the trays half way through. Once the biscuits feel firm they are ready, if you cook them too long the chocolate will catch and taste bitter.

Cool for 5 minutes on the tray and then move to a rack to cool completely. They cool quickly, so melt the chocolate and pour into a piping bag and cut off the tip.

Match the biscuits by size and organise them in pairs. Pipe a swirl of chocolate on the flat side of one biscuit and then sandwich with another. I found it was best if the chocolate had cooled a little, otherwise the top biscuits slid off the bottom biscuit! 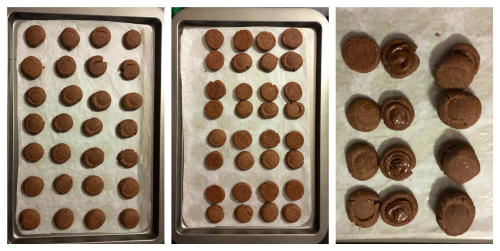 And the Lady's Kisses are ready to serve, perhaps dusted with a little icing sugar. They are a dainty bite, or two. 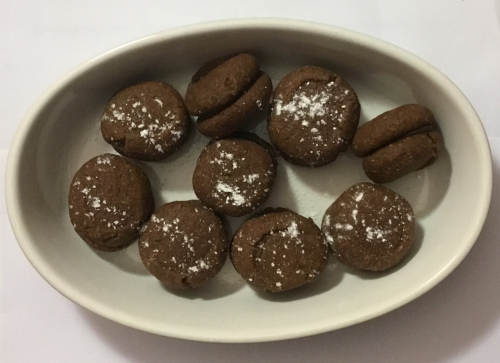 hello 2paw its dennis the vizsla dog hay mmm all that butter luks delishus!!! i cannot eet it wunse the choklit is added so maybe i cud just hav the butter part!!! i am sending tail wags for yore finger to kontinyoo to feel better!!! ok bye

Yummo - who could resist these little chocolate goodies.