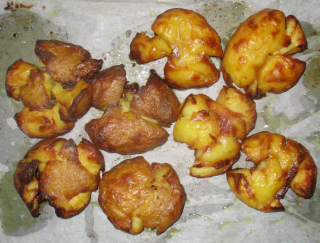 A few months ago there was a show on Our ABC called Short Cuts to Glory, hosted by Matt Okine. It was a beginner's guide to baking, with recipes, tips and hints from famous Australian chefs and bakers. I watched most of the show and borrowed the book from The Library. I have only cooked one thing, and it was spectacularly simple and successful: the Smashed Potatoes. The recipe comes from The Monday Morning Cooking Club, and they are indeed the crispiest potatoes I have ever baked or roasted.

You do need the right kind of potatoes. The recipe specifies chats, which I found out are baby Colibans, but basically any small-ish floury potato. And this is a 3 ingredient recipe, so super easy. I think the trick is to boil and then bake the potatoes. I did half with skin on and half peeled, just to see what happened. The recipe suggests adding chilli flakes, lemon zest, herbs or even bacon to up the flavour ante.

That is all there is to say: gorgeously crisp and tasty smashed potatoes. Yum!!

Prepare a tray by covering it with baking paper. It says to preheat the oven to 180*C now, but it takes about 25 minutes to boil and cook the potatoes, so I usually turn the oven on 10 minutes before I need it. 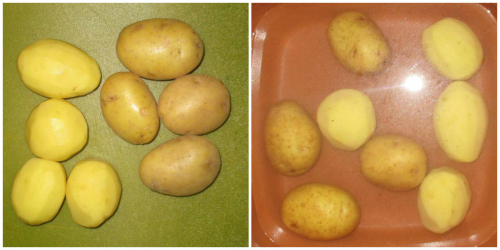 Put the potatoes, peeled or unpeeled as you like, into a saucepan and cover with cold water. Bring to the boil and the boil gently for 15-20 minutes or until they are tender. If you poke them with a thin sharp knife and it pierces the potatoes easily, they are done. 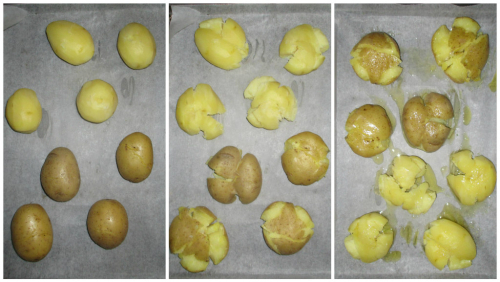 Cool slightly, and place on the tray. Press down with the heel of your hand, or any other flat pressy thing, and gently smash the potatoes. Drizzle with the olive oil and sprinkle generously with salt. Roast for an hour, or until the potatoes are a dark golden brown and crispy. My potatoes took 70 minutes tonight.

Rest on some paper towel if they are a tad oily, and then serve, in all their crispy glory!!! 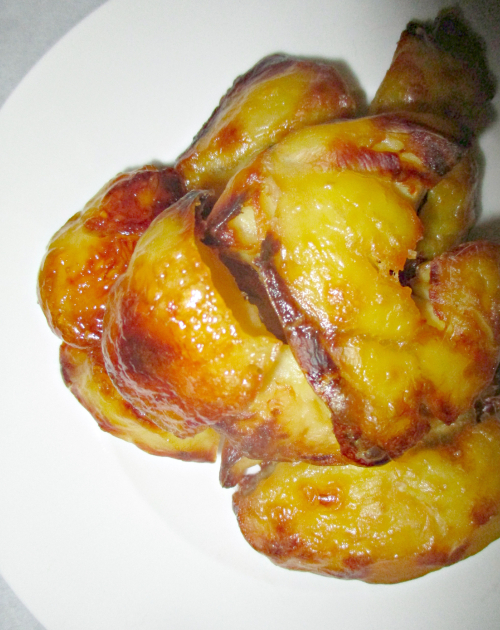 They look so yummy. Thank you for your test kitchen skills!

hello 2paw its dennis the vizsla dog hay uh oh wot did the potatoez do to git themselvs smashd??? maybe they mowthd off to the ketchup bottel or sumthing!!! ok bye

I meant to ask the other day, did you prefer the skin-on or skin-off ones? or both the same. I usually leave the skins on my potatoes (no, not just from laziness, although that is a charge that can readily be laid upon me ;-)

Yum! I too wish to know if the skins on/off made any difference to your eating pleasure cindy? Like Jennifer above, i like my skins on because I'm mostly too lazy to take them off.