Oh it has been so lovely and cool. Well perhaps the pendulum of weather swung a bit too far the other way: we had terrible storms, hurricane like winds, 104mm or 4in of rain and more than 20,000 households are/were without power. At our house we had a lot of rain and a small branch fell off a small tree. Lorelai Gilmore and Hedy Lamarr are in their element, which must be water?? Well it isn't fire, wind or earth, so it must be water. Hedy loves to make splashes and waves.

Gilly is looking her best now the weather is not so hot: 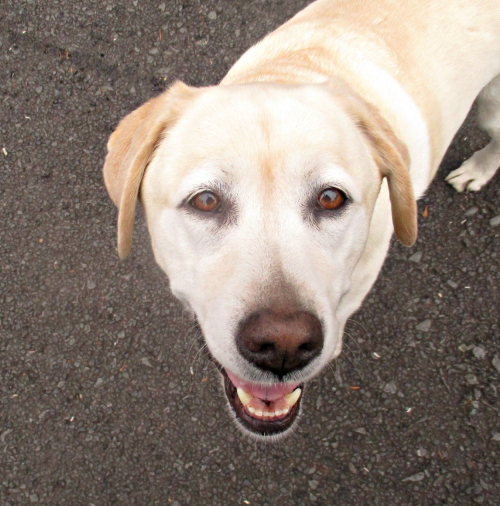 And this photo is very typical, Gilly is happily trotting past and Hedy wants to play with the ball. Now! 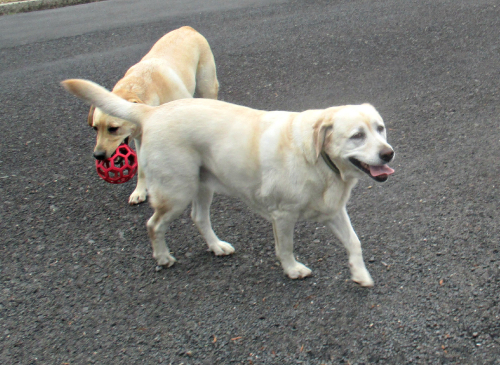 MrsDrWho's mum gave me some greengages. I love greengages. I just cut them in half and popped out the stone and boiled them with some water and about a tablespoon of caster sugar for ten minutes. I plan to have them with yoghurt, some expensive vanilla ice-cream and maybe top some with a crumble?? When I was little we had a green and a golden gage tree, they are a kind of plum I think. It is the taste of my childhood. I am also lucky to have received a jar of greengage jam.... 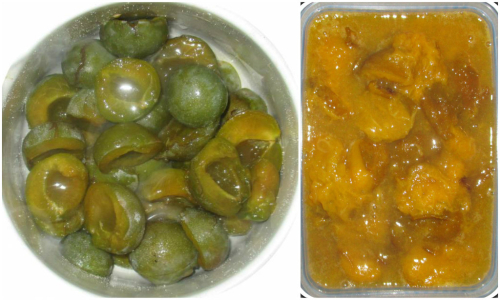 I have sewed a few bags already this year. I am not sure of numbers. I have a list somewhere, not sure where, but I can ask Judy-May the number of her positive word bag. 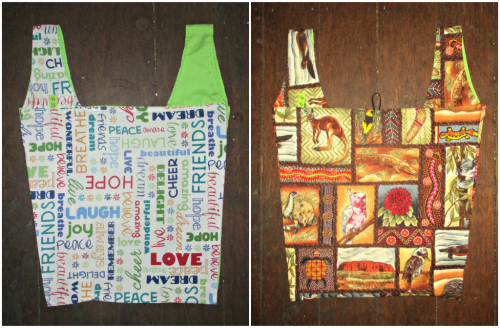 I am an easy mark when I see Labrador bags in the supermarkets. This is a Coles Easter bag and $1 of the $2 price goes to The Guide Dogs. I bought three because that is all they had!! 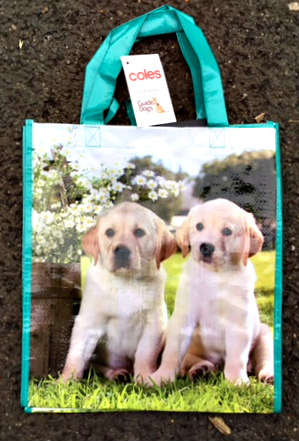 I saw this pattern on The Internet and had to have it. The Spotlight didn't have a copy at our shop or online and I ended up buying it from The Etsy. It is on its way and the weather is cool... Who knows, I might sew? 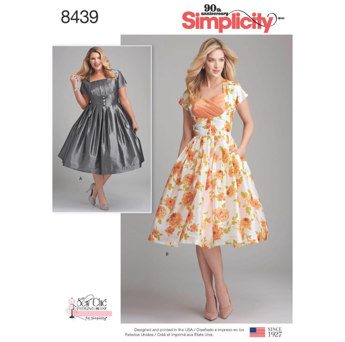 I booked a ticket and like everyone else assumed that we would be having a "meeting". No, that was not what happened. Most of the people there were on the north side of sixty, if not seventy. There were FOUR chairs and a couch.

Eventually they rounded up a weird assortment of chairs, not enough for everyone and for almost an hour I sat on the floor. Then we were treated to a similar amount of time of the television screen buffering. Buffering and buffering. Older people were watching the meeting stream on their smart phones. It appears my ticket just entitled me to almost watch the live stream. That's it. No discussion as promised. And we were told to both cheer when we were to have a live cross, and also to be deathly quiet. Most people couldn't hear the instructions given by a softly spoken woman on the stairs to people hard of hearing. It was not worth the bother. I shall be writing a letter to Michelle Guthrie offering my organisational skills and expertise. I can organise sitting down. I can organise chairs, and a microphone (it's the ABC for dog's sake), and someone to make sure the streaming feed is working. It did eventually work, but we ended up watching a TV backwards through glass and relying on the closed captions because there was no sound. 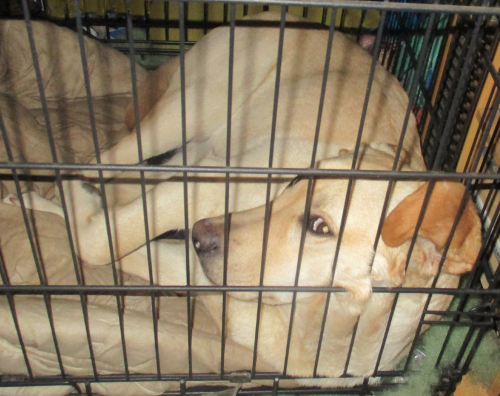 We are seriously considering putting Hedy's little box away. She's older now and though she naps in it, it takes up a huge part of the dining room. Well I just looked and not really a huge part. And it's not inconvenient, but one day we will have a new puppy and we don't want two little boxes. We are not sure how she will cope.

There has been much news of kangaroos/wallabies on the Sydney Harbour Bridge. My mum has a wallaby that greets her at her front door after it has chewed all the new leaves from her plants. We see lots of wallabies and pademelons. 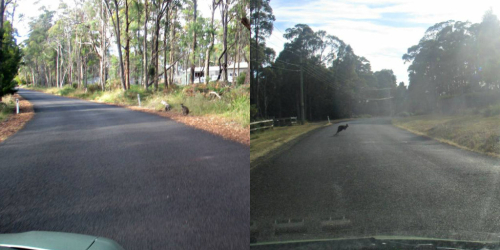 We see them almost every day as we drive to and from the dam. If we are walking up the hill with the dogs on their leads the marsupials are quite unafraid. They know they can leap high over the wire fence and be away, even if a dog accidentally gets loose. Which they won't because we don't want them chasing the wild life, or running on the road. And yes, I did stop the car to take a photo. There is little traffic and the rule is not to stop for animals but there is no danger if you slow down and give way to them.

Autumn is coming. The nights are drawing in. The temperatures could still be high, but it is only a fortnight until Autumn officially begins. Yay!! I shall be in my element.

The Coles bags were made for you, Hedy and Gilly. That is one cute dress pattern - can't wait to see the finished product. I have only found greengages in the shops once - sigh.

There was also a wallaby fished out of the harbour by a ferry crew a few days after the one braving bridge traffic. It was exhausted and would probably have drowned as it was nowhere near land.

hey ho - you won the giveaway on my blog. Can you email me an address ? there is an email link on the blog.
Jodie from ric-rac !

hello 2paw its dennis the vizsla dog hay i am happy to heer the nasty hot wether has broken altho i am sertinly no fan of storms or hurrikayn forse winds!!! a happy meedyum wood be nice!!! i mite be ok krossing a bridj garded by kangaroos but i wood not want to git ennyware neer a wall o'bees just wun bee is bad enuf with its buzzing and its stinging i kan hardly imadjin wot a hole wall o'bees wood be like!!! ok bye

Loving those doggie faces ! The large dog in the small box made me laugh ! :D