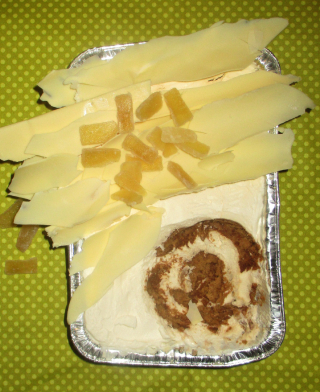 I do like ginger, all things ginger, and yesterday when the new Delicious Magazine for March appeared it was straight to the supermarket to buy the ingredients for the Ginger Snap Cream Cake. It is a variation on the traditional Chocolate Ripple Cake. You only need six things, and it is quite easy to assemble and there is no baking at all.

I have just one quibble, which is a quibble I have been having with a few recipes lately: the sizes of loaf tins. I never have the right size. My favourite tin was too long, and the other one was too narrow. I bought some disposable foil loaf trays, which were also not the right size, but as close as I could get. With a little more cream and another packet of biscuits I made two desserts.

Australians are very picky about our Gingernut biscuits, we have several versions for various states. I used 1 2/3 packets or 400g-ish of biscuits and another 300ml of cream. I still had a little ginger syrup left over. I didn't use crystallised ginger. I am able to buy Naked Ginger, which is still sweet and sharp but not as sugary, which I prefer. If you don't want to use sherry, you could substitute orange or apple juice, or use lemon cordial.

You start this recipe the day before it is required, and I like the idea of being prepared for an upcoming dessert occasion. I am now prepared for Sunday dinner and the neighbours have a surprise dessert!!

Make a ginger syrup by pouring the ginger cordial and sherry into a small saucepan over a high heat and then bring it to a boil. Boil for 5 minutes and it should have reduced by 1/3. I was chuffed when I measured to see I had exactly 250ml, so well done science. Set the syrup aside to cool. 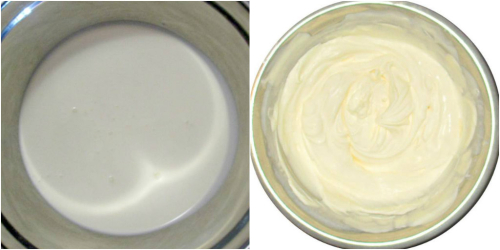 Whip the cream to stiff peaks and refrigerate until you are ready to begin. I added some sneaky vanilla extract, about 1 tspn.

The recipe says to brush the tin with the syrup, I did this the first time, the second time I put a thin layer of cream over the sides and base of the tin. Now it is time to dip each biscuit in the ginger syrup, making sure both sides are covered, but it is not softened: it's a quick dip! Arrange the biscuits over the base of the tin. I tried two methods. With the first I broke biscuits to fill in the gaps. I didn't like that.

In the second tin I overlapped the biscuits slightly, and just used halves to fill in the ends. I turned the tin around and started with whole biscuits at the other end as I layered.

Cover each layer of biscuits with about 1/2 cup of whipped cream, or as much as you need so you do not see any biscuits poking through. Continue layering until the tin is full, or the biscuits are all used up, and finish with a layer of cream. Wrap in clingfilm and refrigerate overnight. The flavours will meld and the biscuits will soften. 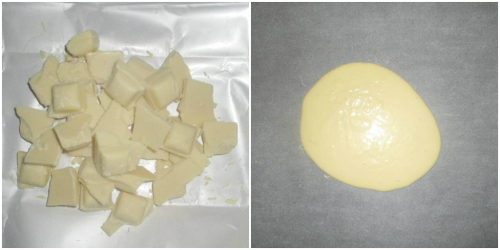 Meanwhile, make the chocolate shards. Melt the white chocolate using your preferred mentioned: I did 30 seconds bursts with stirring in between using the microwave. Pour the melted chocolate over a piece of baking paper and spread evenly. I used my offset palette knife because it makes me feel cheffy. Use a piece of paper that is bigger than you think you will need. I know this because I did not. Cover the chocolate with another piece of baking paper and smooth. This is where the bigger-than-you-think-you-need paper comes into play.

Wrap around a rolling pin, or the tube from the clingwrap, and secure. You don't want the chocolate to ooze out the ends. Freeze until set and when you unwrap it, you make shards!!

Slice the ginger thinly and you are ready to go. Top the cream cake with the shards and the ginger and serve while the shards are still cold, otherwise the wilt and they don't look as pretty: see below. It is very moreish and definitely a retro treat!! Ah sweet memories! When my mama used to make this (we're talking decades ago, here), she would sandwich the biscuits together with the cream (keeping them in a log shape as they came out of the packet), and pour over the sherry. Adding the ginger to make a syrup would have been a good idea, but we never had it. Then the whole thing was covered in cream on the outside, and refrigerated. No need for any tins at all. I guess it was assembled on aluminium foil, then wrapped to refrigerate, but I don't really recall that bit. I recall the eating though!

Yum, this sounds like my kind of cake. I adore ginger too.