This morning while I was browsing the blogs I follow I saw The Decorated Cookie had made Twix Cookies on a Stick. Oh my word, I knew exactly what I wanted to bake today: Twix Biscuits!! A Twix is a finger bar of biscuit, topped with caramel and then dipped in milk chocolate: yum. I took a chance and did not chill the dough and it worked perfectly well, so you can go ahead and not chill the dough. I am living on the biscuit edge!!

I made half the recipe, so I measured out half an egg, by whisking the egg and then halving the millilitre measurement. My biscuit cutter measures  about 5cm and I made 20 biscuits, which means the full recipe for the dough would make about 40 biscuits.

I used Jersey caramels and pouring cream to make the caramels and milk chocolate melts for the topping. I loved making these biscuits and I think if I had a teeny tiny circle cutter I would make teeny tiny Twix biscuits, they are so cute!!

I am giving the quantities in cups because that seemed to be the easiest thing to do for em today. It also circumvents the whole making things metric. Still, I am converting the caramel and chocolate because they aren't in cups.

Preheat the oven to 190*C and line two baking trays with baking paper.

Cream the butter and sugar. When it is pale and creamy add the egg and vanilla.

Once the mixture is combined, slowly add the flour and salt, and mix on a low speed until the dough comes together. I used my hands to bring it together to form a ball. I love the special mixer attachment which scrapes down the side of the bowl, it really does work.

I roll out dough between two sheets of baking paper, so as not to need extra flour and generally avoid sticky dough.  I use half the dough, cut out biscuits and then add in some more dough, about 1/4, etc. Cut out the biscuits and arrange on the baking trays. I left about 2cm between the biscuits and they did not spread very much. 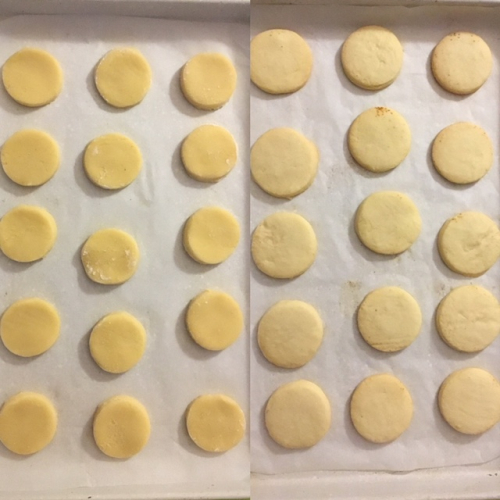 Bake for 15 minutes, turning the trays and swapping them half way through. Cool on the tray for 5 minutes then move to a rack.

Melt the caramels and cream in the microwave for 90 seconds, mix to combine and then top each biscuit with as much as you choose.

Wait for 10-15 minutes until the caramel is set, then spoon or pipe on the melted milk chocolate. And you are done!! Keep the biscuits in an airtight container, I don't think they need to go into the fridge, and enjoy your Twix fix!! 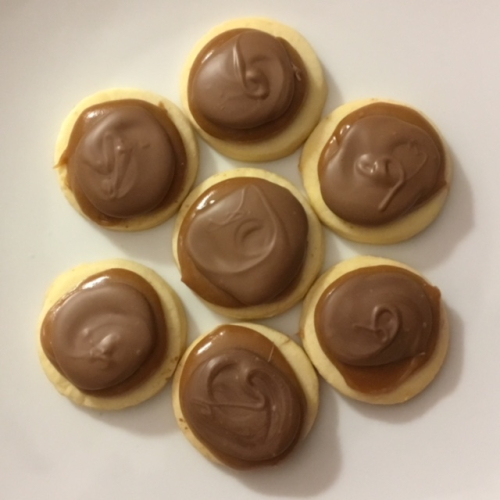 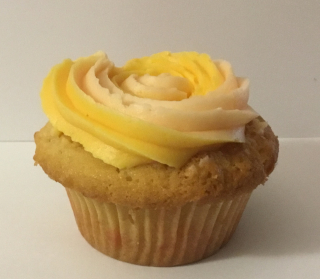 I have already baked these cupcakes once, for MrsDrWho, so I knew they were good. I baked a batch today to say thank you to the Doctors and Nurses at The Vet. When we haven't been to The Vet for a while I like to take them something baked. The recipe is from the May 2018 Taste Magazine. In the magazine they pipe a buttercream swirl as high as an elephant's eye on top of the cupcake. I did not. I am not a fan of huge amounts of buttercream, I prefer the cake to be the star and the icing to be, well, the icing on the cake.

I used the reverse creaming method, from The Scran Line, but you can absolutely cream the butter and sugar, add the eggs and then fold in the other ingredients.

I would not bother colouring the cake batter next time. The coconut cream does not play well with pink colouring once it is baked. I used red and yellow to make the pink and orange buttercream colour. I also think a pink and white swirl would look delightful.

I did colour the buttercream, and I love the way the icing looks. The recipe calls for white chocolate hearts and mini pearl sprinkles, but I eschewed those.

On the whole, an easy bake, and very coconutty!!

Preheat the oven to 150*C  fan-forced and line a muffin tin with paper cases.

Put the flour and sugar into the bowl and beat until combined.

Add the softened butter and continue to beat on a low-medium speed until it forms a sand-like texture. Add the coconut.

Mix the eggs, coconut cream and vanilla extract and add to the dry ingredients with the mixer on a low speed. Once it comes together, scrape down the bowl and then fold together with a spoon, just to check there are no ingredients hiding on the bottom of the bowl. 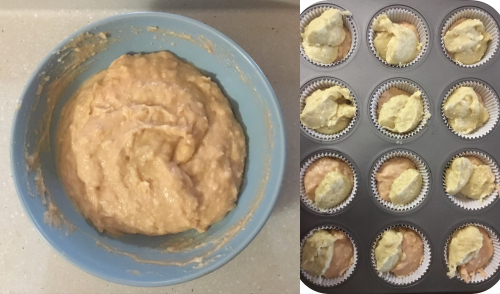 Here is where I coloured half the batter pink, I really wouldn't bother marbling the cupcakes. The mixture is perfect for 12 x 60ml cupcakes. I used an Australian tablespoon which is 20ml, and spooned 3 level tablespoons into each paper case.

Bake for 25 minutes, turning the tray halfway through. I left my cakes a tad too long and I feel they were just a little too golden. I have no photo, not because I am hiding them, but because I thought I had taken one. You can see the golden colour in the photo at the top of the post.

Cool in the tin for a few minutes and then carefully lift out and cool completely on a rack.

While the cupcakes are cooling, or anytime really, make the buttercream. Use a mixer to beat the butter until it is very pale and creamy. 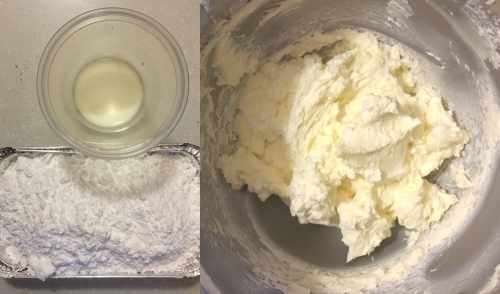 I mixed the vanilla and the milk together. Gradually add the icing sugar and the milk mixture to the butter, alternating, beating on a low speed at first and then higher, until combined. 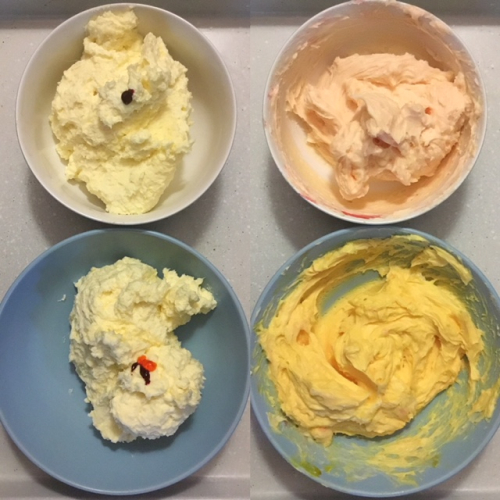 Divide the buttercream between two bowls and colour as desired. Prepare a piping bag with a 1cm fluted or star tip. Spoon the pink buttercream down one side of the bag and the orange down the other. I piped a few test swirls until both colours appeared. Pipe swirls, as desired, on top of the cooled cupcakes and then eat!! 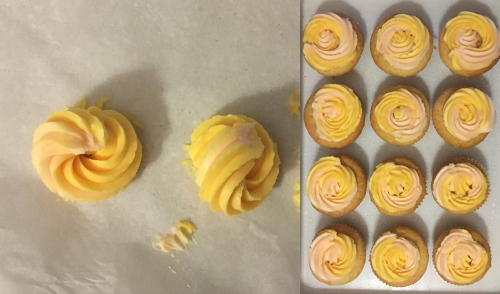 I find coconut cakes do not keep for a long time. If the climate is warm they need to be kept in the fridge in an airtight container, but I think 2-3 days for these cakes at most. 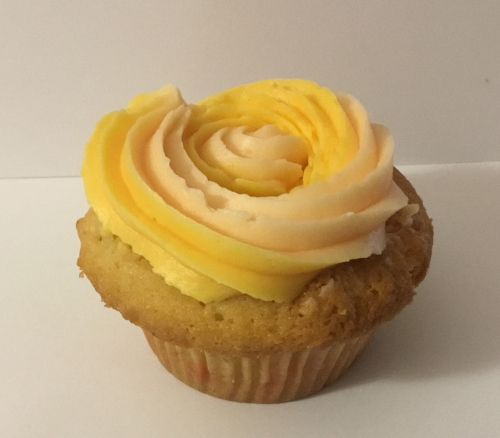 Friday Food: No, just no.

Due to circumstances beyond my control there is no Friday Food this week. I baked cakes, I took photos, MrsDrWho took these photos, I made people eat the cakes: then we had huge storms and the power went out and then my iPad (containing said photos) decided to break down. 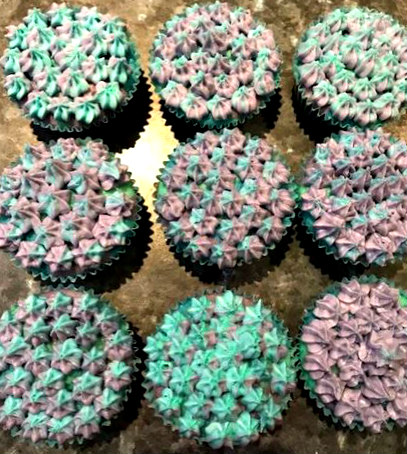 Ironic, isn't it, that the very week I was actually organised, well and ready, The Universe conspired against me. The storms, floods and wind were the worst since 1954 and the rainfall in Hobart, 250mm or 10 inches, was the fourth highest for one day since records began. 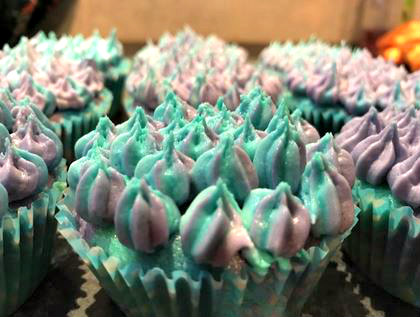 I made Mermaid Magic flavoured cupcakes. The Mermaid Magic is a special flavouring from Queen Fine Foods and it tastes like melon and grape. I was inspired by Nic from TheScranLine and his Sea Kween Mermaid Cake and his Sea Kween cupcakes. I used the method for the cupcakes and the Mermaid Magic flavour. The cupcakes were magic: I coloured the batter and piped it into the cupcake papers. I also coloured the buttercream icing and piped that on top with all the colours in the one piping bag. 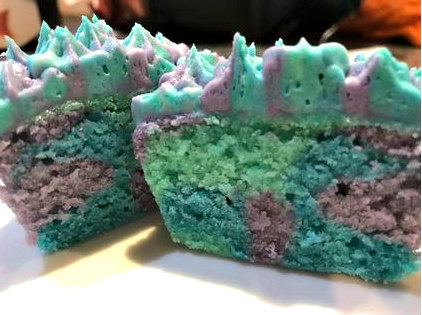 The people tasting the cakes fell into three categories: 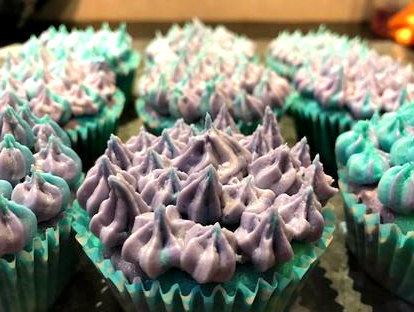 And that's pretty much it!! I loved the process of making and colouring the cake and the icing and Onyi said the texture of the cakes was great 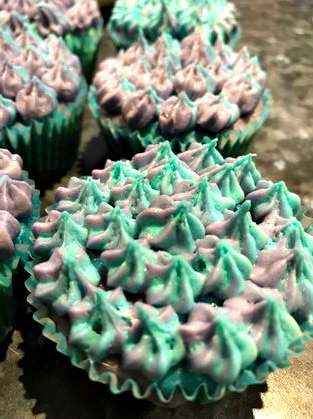 I say so long, farewell, auf wiedersehen, good bye to my iPad and the 4500 photos. I have never used The iCloud because I am afraid of it.  Maybe I should conquer my fear?? Luckily I am very organised photo-wise and I have all the photos from my blog and others I just like, saved on my computer and DVDs. This gives me great impetus to use the photos and make a second photo book.

What else will happen?? Who knows!!! 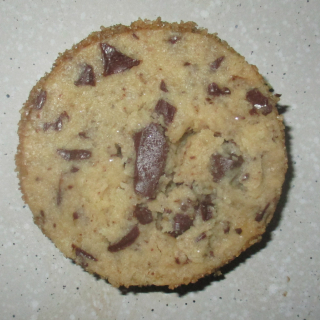 I saw this recipe in the May Delicious magazine. Chocolate is a favourite ingredient because I can’t have it: I like to live vicariously though my friends’ enjoyment of the chocolate treats I bake for them. I also liked this recipe because I had all the ingredients except for raw sugar. It is always a good recipe if I have the ingredients. And I did stick to the letter of the recipe in every respect. Pigs do fly. I used an ordinary dark chocolate, not a 70% one. The recipe lets you decide.

The only comment I have about the recipe, is that it was difficult to slice the chilled biscuit roll. I used a serrated knife at first and there was chocolate biscuit carnage. I switched to a non-serrated knife and it was much better, but the dough is not terribly sticky and I only ended up with 6 biscuits instead of 12, when using half the dough. This did not stop me from baking the flotsam and jetsam. I tasted a tiny piece when they were baked and it was to die for: buttery, brown sugary and salty. Absolutely delicious and it melted in my mouth.

As a bonus I still have a chilled roll of dough in the fridge for any biscuit emergencies!!

Prepare two baking trays. My new trays are non stick, but I would normally use baking paper. 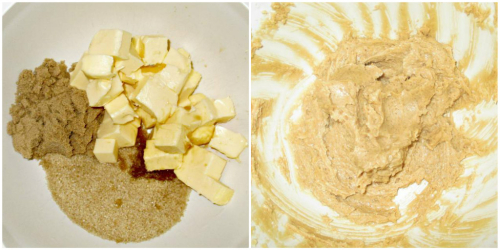 Cream the butter, raw and brown sugars and vanilla extract for 3-5 minutes until light and fluffy. 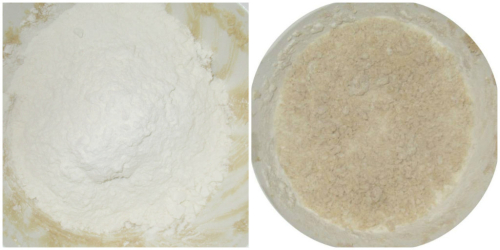 Scrape down the sides and then, with the beater on a low speed, add the flour. Beat until just combined. 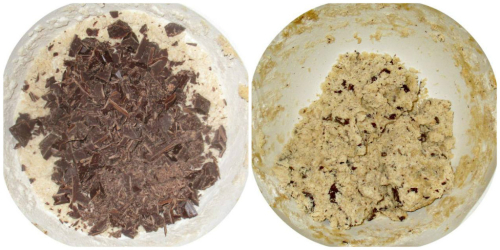 Stir in the chocolate chunks so they are evenly distributed. 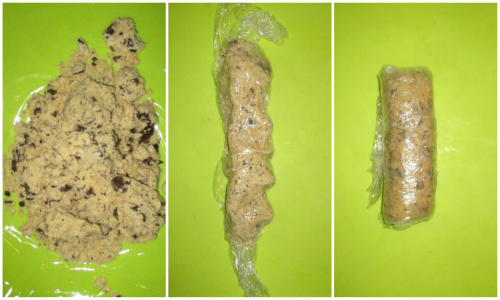 Spread out some plastic wrap and tip the biscuit dough onto it. The dough does not form a ball or come together at all really. Roll the wrap around the dough and then squash the dough until it forms a log. I wrapped it again in more plastic wrap, and twisted the ends. Refrigerate for 2 hours, or until totally firm.

Before you unwrap the dough, preheat the oven to 175*C. 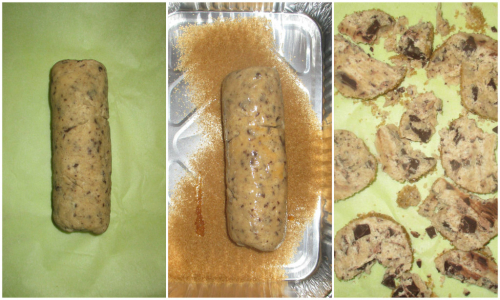 Whisk the egg in a small bowl. I poured some Demerara sugar into a tray so I could more easily coat the dough. Brush the outside of the biscuit log with the egg and then roll in the Demerara sugar so that it is well coated. Use a non-serrated knife to slice 1 1/2 cm thick slices of dough to make biscuits. This is the half of the dough I tried to cut with the serrated knife. 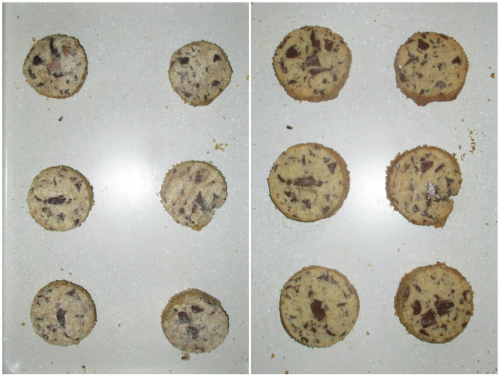 Put the nicely sliced biscuits on the tray, they do not really spread at all, so you can place them just 2cm apart. Sprinkle with as much, or as little, salt as you like and bake for 12-15 minutes or until the edges begin to brown. I baked mine for 18 minutes. Cool on a rack and then enjoy! 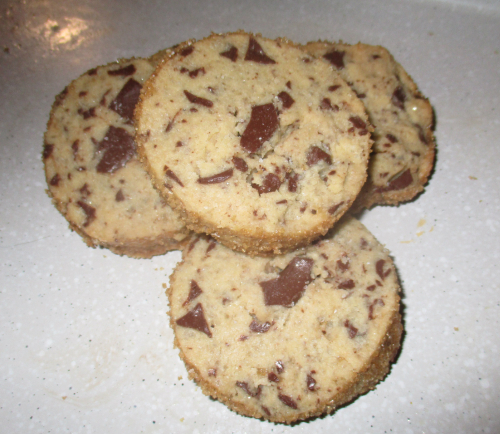