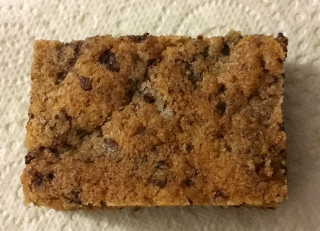 Today I baked cookie bars from the Super Food Ideas magazine, July 2018. Instead of making individual biscuits, you just bake a slice and cut it up!!

I could see immediately when I put the mixture into the tin that I had probably chopped the chocolate too finely. Their cookie bar had bigger chunks and more open spaces of plain cookie. I did follow the recipe, but I used 1 tspn of cinnamon paste instead of 2 tspn of ground cinnamon. The paste has made the cookie bar much darker in colour.

It was very easy to make and the ingredients were already in my kitchen. I think the addition of cinnamon is a nice touch, but it could be left out if you are not a fan.

And that is really all I have to say about this recipe. I am taking it to afternoon tea tomorrow where I have it on good authority that there will be egg sandwiches!!

I like to soften the butter and warm the sugar in the microwave for a minute on a lowish temperature. Then cream the butter, sugars and vanilla for 5 minutes. I also added the cinnamon paste, whereas the ground cinnamon should be added with the flour later.

Add the egg and beat until just combined.

Add the dry ingredients and beat for a further minute.

Finally stir through the chocolate.

Press gently and evenly into the tin and sprinkle over the salt if you like. Bake for 25-30 minutes. Leave in the tin until almost cool and then cut into bars. 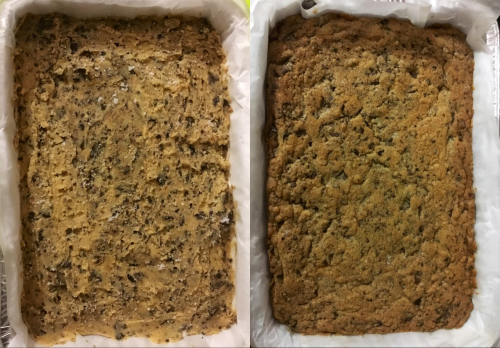 I think these should keep in an airtight container for about a week. 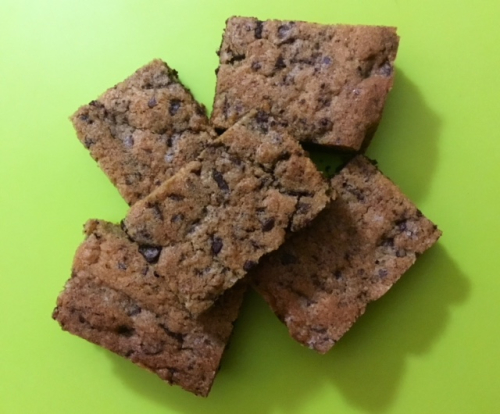