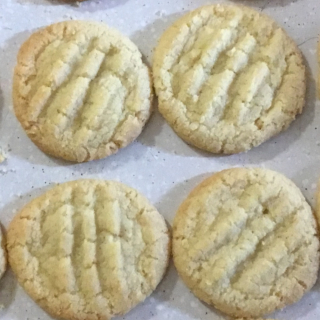 We are blogging from the sick bed this evening. My annoying sore throat turned into a throat and gland carnival with the focus on swallowing swords! I respond very quickly to antibiotics and so only a day and a half later I am feeling less ill.

I baked these on Wednesday for the LoveBoatLady, who is recently gluten free. I searched on the internet and found this recipe at TriedandTrue. The recipe worked perfectly, I did contemplate using some lemon zest, but went with vanilla bean paste as per the recipe. The recipe suggests cinnamon and maybe even turmeric as a flavour. I think they would be nice with some finely chopped preserved ginger too.

I made my biscuits half a tablespoon, or two teaspoons in the rest of the world, and made 34 biscuits. They need to be kept in an airtight container and did soften over time.

Preheat the oven to 170*C fan-forced and line two trays with baking paper.

You can sift the almond meal and icing sugar if you prefer, but I just put the dry ingredients in a bowl and whisked by hand until all the lumps disappeared.

Add the softened butter and vanilla and stir with a spoon or spatula until it comes together as a dough. You may need to add a little extra almond meal if the dough is a little sticky, and I did do that.

I used a 20ml tablespoon to measure out the dough into portions, halved them and rolled them into balls.

The shortbread does spread a little, so place the biscuits leaving room for expansion. Flatten with a fork dipped in almond meal and bake for 8-10 minutes, turning and swapping the trays half way though. I did bake these for the whole 10 minutes, and I kept an eagle eye on them so they did not colour too much. You want them to be pale.

Leave them on the tray to cool completely. The shortbread with be very soft when hot, but harden on a cooling.

And that is it, some of the easiest biscuits, or shortbread, I have ever baked. Oh, I just thought they would be nice dipped in dark chocolate too. Yum! 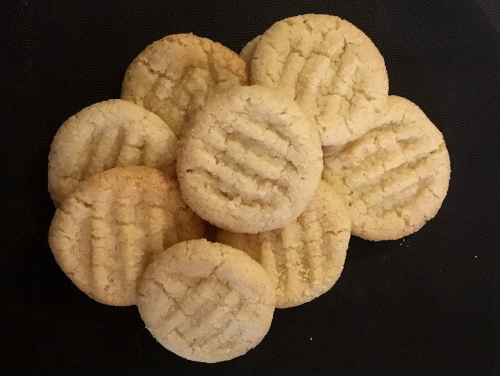 This biscuits look so good, and a bonus that they are gluten free for your friend. Sorry to hear the winter nasties have attacked - hope you get well soon.

hello 2paw its dennis the vizsla dog hay i hav never ben shoor wot mayks shortbred shortbred i gess it is becuz it is not verry tall??? but also verry gud??? kind of like tyrion lannister??? ok bye

shortbread ... oh, yum!! ... and made with almond flour ... even yummier- i have no problem with gluten (let's face it, i am about as delicate as a moose!) but i love the taste and texture that almond flour has- i would eat the whole lot (and one day things will catch up with me, and i will resemble fore-mentioned moose!)- when temps lower and baking becomes more attractive, these are on the list- our air temps here have stayed in the triple digits lately, and by the time our incessant humidity is factored in, the results are suffocating- this is normal for our location, but everyone manages to conveniently forget about it during our more comfortable seasons, so yearly we are shocked and horrified by summer-

sorry you've been felled by a plague- i hope your beautiful furry nurses have been tending you and giving you comfort- your medical system seems to be wonderful with prompt treatment, so maybe by now you are already feeling better and able to be out again-

do take care- my very best wishes, as always, and many pats and tummy rubs to the girls-
barb in texas