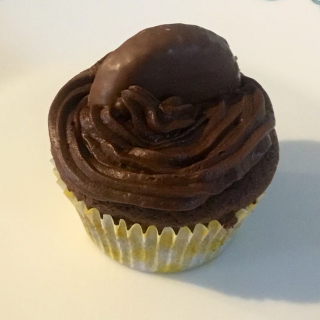 There are lots of biscuit based baking recipes in the August Taste Magazine, and I chose the Caramel Crown Muffin Brownies and I have made three batches, very successfully. A Caramel Crown is a plain sweet biscuit, topped with firm caramel and then dipped in milk chocolate.

Your  biscuit just needs to fit inside your muffin tin holes.

I made 15 muffin brownies from the mixture, because the biscuit takes up some of the space in the muffin paper cases. This is annoying, because there are 12 biscuits in a packet. Maybe my muffin tray has smaller holes? The first time I did buy two packets because I topped the little cakes with buttercream and half a biscuit, but the last time I used a Rolo block of chocolate and that looked very posh.

The brownie is melt and mix so it is very easy and quick to make. Each time I ended up baking the brownie muffins for 30 minutes instead of the 25 the recipe calls for. I only made 1/2 or 2/3 of the buttercream as these are very rich. I did heat some up in the microwave to serve with Caramel Crown ice-cream, but MrsDrWho said she preferred the biscuits to be crisp inside the muffin, and not bendy.

I didn’t use the buttercream recipe as I felt it would be too much chocolate on top of an already choc filled treat. I used a Donna Hay recipe which uses cocoa instead of chocolate: 250g butter softened, 320g icing sugar, 50g cocoa and 60ml milk.  I will included the buttercream as per the recipe here.

I highly recommend this recipe, and I think it will become a favourite. You could substitute other round biscuits, I might try Mint Slices next time. Oh or a Chocolate Royal.....

NB An Australian tablespoon is 20ml, or 4 teaspoons.

Melt the butter, chocolate and sugar in the microwave. I use Medium in 30 second bursts and stop just before the chocolate is fully melted and then stir until it is smooth. Cool slightly, and then add the eggs one at a time, whisking well.

Add the flour, cocoa and baking powder, begin to fold it in, and then add the sour cream. When you can’t see any streaks of sour cream the batter is ready.

I put a tablespoon of the batter into the bottom of each paper case, and then pressed in a biscuit, allowing the batter to rise up slightly around the edges. Through trial and error, I found 1 1/2 tablespoons to be pretty much the right amount so my muffins didn’t overflow. 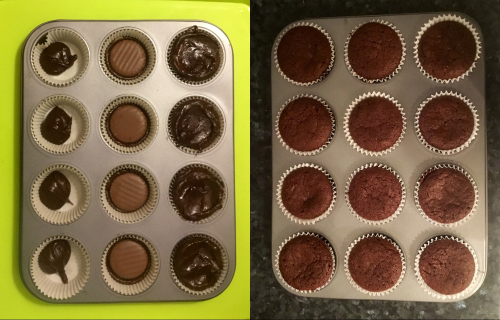 Bake for 25-30 minutes, swapping and turning trays half way through. The muffins are baked when they are slightly cracked on top, and a skewer poked into the centre comes out clean.

Cool in the tin for 15 minutes and then transfer to a rack to cool completely.

To make the buttercream in the recipe, beat the butter with an electric mixer until it is pale and creamy: 2-3 minutes. Gradually add the icing sugar on a low speed so it doesn’t make an icing sugar cloud, and finally add the melted chocolate, beating on a high speed until smooth.

Decorate the cooled muffins as desired. I used either a plastic piping bag with the tip cut off, or a star tip, to pipe on the buttercream. To embellish I used half a biscuit or a square of Rolo chocolate bar. These were for the Doctors and Nurses at the vet who looked after Lorelai Gilmore and Hedy Lamarr this week. 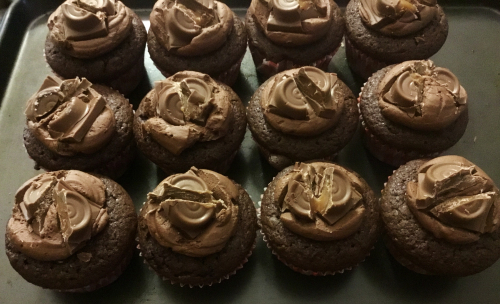 Yay! for chocolate and Yay! for Friday/Saurday Baking. The planets were aligned for yummies. Your Vet Care friends are so lucky.

hello 2paw its dennis the vizsla dog hay theez sownd like verry taysty treets for hyoomans!!! altho my dada keeps saying sumthing like "wot is too mutch choklit???" as if he has never herd of sutch a thing!!! hay dada as a dog i kan tel yoo enny choklit is too mutch choklit!!! ha ha ok bye