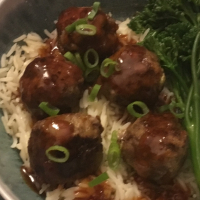 My blog has been sadly neglected of late: I had a cold, I spent lots of time with my friends during the school holidays, I had lots of jobs to do and I was tired. I plan to be a more enthusiastic and regular blogger anon!

My lovely Internet Friend From Michigan sends me interesting articles and recipes and when the Crazy Rich Asian film was released she sent me a link to Spicy Korean-Style Gochujang Meatballs. (See link below. I am blogging from my Ipad and I can’t work out how to make clicky links) I’ve not seen the film yet, but I have made the meatballs and they were a revelation!! I didn’t expect to be able to find the Korean chilli paste, but I didn’t even need to go to the Asian supermarket, it was in the regular one. We are multicultural cooks and eaters.

I used half of the recommended amount of chilli paste as I was wary of its heat: so 3 tspn instead of 1 1/2 tbspn. I wasn’t even brave enough to taste it beforehand. All the other ingredients were things I usually have and use in my cooking.

I read some reviews after I cooked these and lots of people recommended baking the meatballs in the oven without bothering to brown them. When I make these again, I will do that. It is not that they were terribly fiddly, but the idea of popping a tray in the oven and them magically making themselves is too easy to resist.

The meatballs were delicious, I ate mine as a meal with rice, but they are perfect for a nibbles platter, appetisers, and think they would cook well on a BBQ too. I made these a while ago, and the very act of typing up my blog post has made me crave them again. The chilli paste is in the fridge calling to me...........

And now I shall press Publish and be damned.

NB An Australian tablespoon is 20ml or 4 x 5ml teaspoons.

Preheat the oven to 180*C. Preheat the canola oil in a frypan or skillet over a medium-high heat.

Put all the meatball ingredients, not the oil or garnish obviously, in a large bowl and gently combine. The recipe recommends being gentle so as not to overmix. I used a 20ml tablespoon to scoop out the meatballs so they were the same size, and I made 24 meatballs. You can make them bigger or smaller!

Fry the meatballs in batches, so as not to over crowd the pan, if there are too many meatballs they will stew, rather than brown. I turned the meatballs once, and then used the sides of the frypan to prop them up and browned the sides.

When they are browned, place the meatballs on a tray and bake them in the oven for 10 minutes, or until they are cooked through. 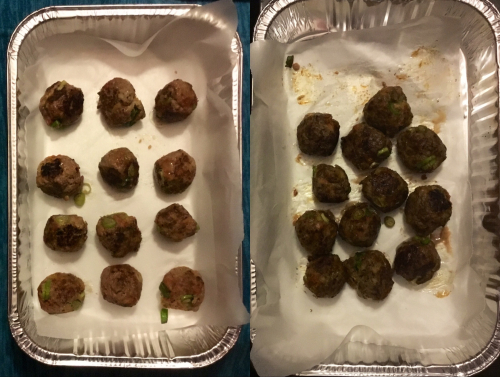 While the meatballs are baking, make the glaze. Simply place the glaze ingredients into a small pan and bring to the boil, simmering and stirring if necessary, for 5 minutes. 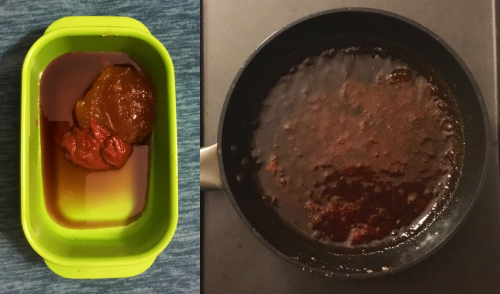 When the meatballs are cooked, brush them with the glaze and garnish as desired before serving. Once you have tasted them, you will know whether you want them to have more or less chilli paste. I was planning to make some pasta sauce tomorrow, but I think I will throw the pasta over for some Spicy Meatballs! Dear Cindy, Greetings of the season! So glad you are well and enjoying the cooking. I plan on making these for dinner soon. You must go for fun to see "Rich Crazy Asians"!!! Some of the supporting actors are so funny! Some not.

We are hovering near 10 degrees down from the mid 20 degrees. May you be warmer and healthier and active. Best regards, Linda

These meatballs look great and sound interesting. I am unfamiliar with some of the ingredients

hello 2paw its dennis the vizsla dog hay mmm meetbals!!! yoo kannot go rong with meet and i am a fan of things like tennis bals so i bet i wood eet this rite up!!! if krool krool dada wood let me of korse wich he wil not!!! ok bye

It's good that you've been busy, and that you're over your cold. My nephew married into a Korean family, and we get to eat delicious authentic Korean dishes when his in-laws visit.

Nice to see you here. Life here has beem crazy too.