Once More Unto The Beach, Dear Friends, Once More.

It is very annoying when all your friends are on holiday and/or have relatives visiting. There is so much socialising to do: it wears me out!! It is the best kind of tired. The tired I feel when I am tired from too much laughing, talking, eating, and walking on the beach. 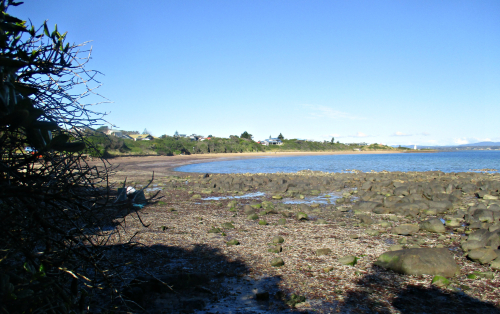 For a Winter's day, it was pretty perfect. The sun shone and there was a light breeze. It was too cold to go in the water, even to paddle, but it was a perfect walking along the beach day. 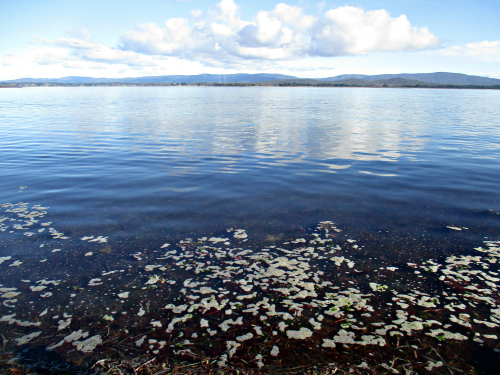 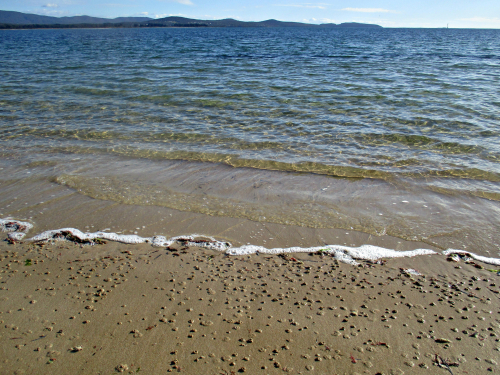 Thousands of little crabs must have erupted all at once sometime that morning. The waves were small, but very noisy. It is true that the sea air is very invigorating. I collected lots of cuttlefish for some birds I know. 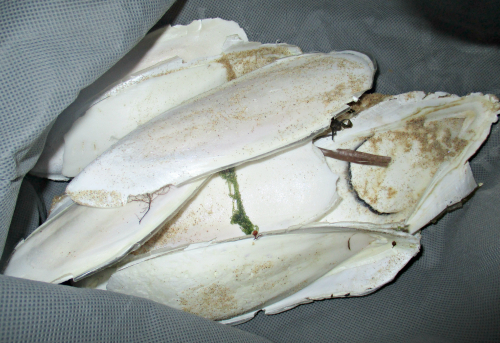 I finished a cotton doily for MissSingapore. The body is knitted on 2.5mm needles and then the edging crocheted with a 2.5mm hook. I blocked it by drawing a circle around a large saucer, dampening and then pinning each crocheted loop, making sure the first double crochet was exactly on the line. It turned out very well, thought in the picture the edging is wonky. 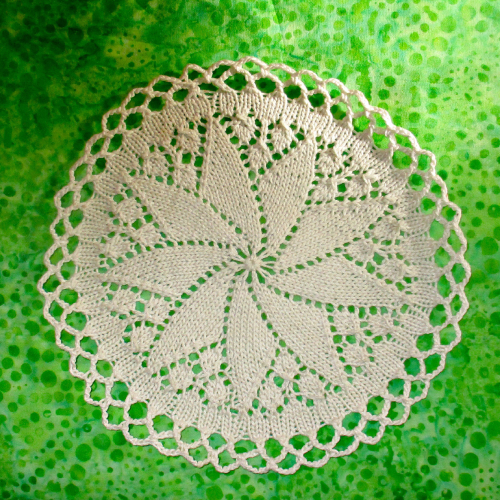 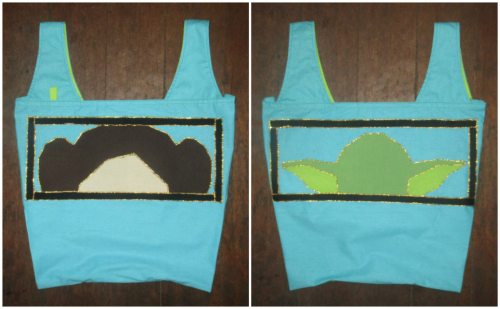 Here is my specially adapted Celery shopping bag (#111) It will hold three bunches of celery comfortably, four sparse bunches at a pinch. 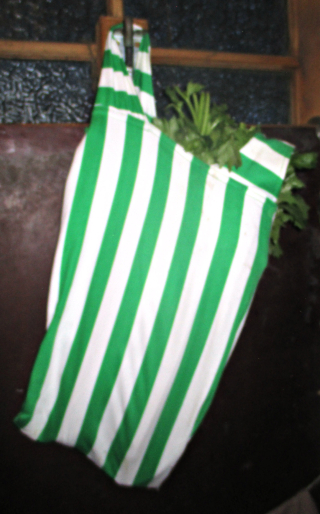 I sewed the final Cat bed, #3, for MrsDrWho's birthday. At our house you have quite a difficult time trying to take photos sometimes. 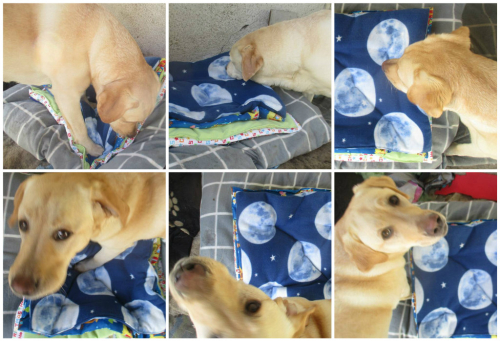 The Cat bed has some super soft polar fleece on top, and then some Star Wars furnishing fabric on the bottom, or vice versa. There are five layers. I have photos of the first two beds as well. 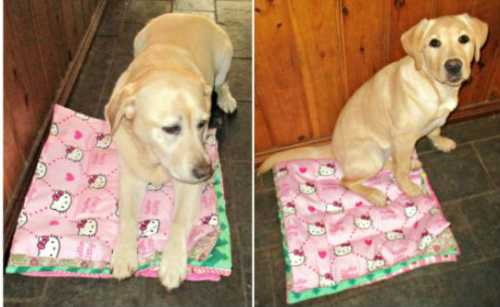 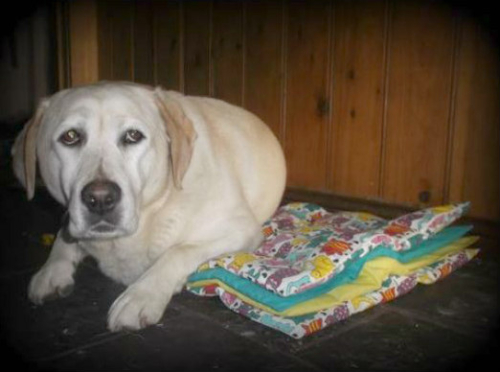 When I look at Gilly in the last picture she looks very worried and sad. It was not long after Peri died, and I think it is when she started to become ill. She missed Peri Pumpkin terribly.

Here are two very happy Labradors on their rainy walk. The camera angle makes Hedy look Giant. Lorelai Gilmore is exceedingly well. She plays rough and rowdy rebel games with Hedy all the time. In fact most of the time I was editing photos, they were playing Tug-of-War with a piece of cloth. Hedy Lamarr has been wicked. She chewed a clock. We shall speak of this no more....... 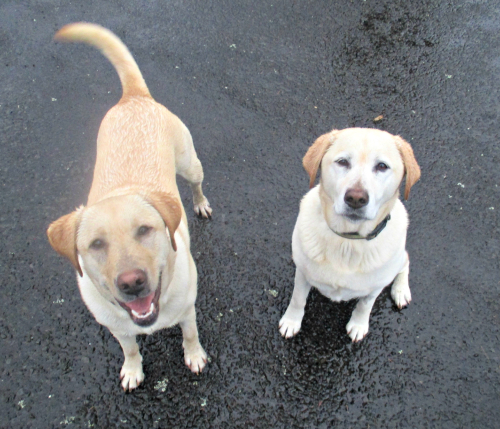 This Winter the mornings have been very icy and especially cold. So cold, that there was ice on the inside of the windscreen and tiny drops of ice frozen on the tips of the conifers at the dam. 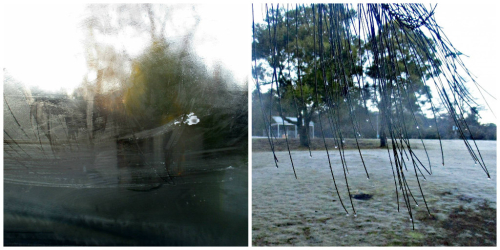 A few years ago I bought some Supernatural fabric from The Spoonflower for MrsDrWho's sister. I planned to make a dress for her. And today I did. I am not confident at all sewing stretch fabric, so I used a beginner McCalls pattern, 7348. I only had one yard of the Supernatural fabric, so I bought some cotton jersey from The BlackSpot of Doomlight (tm) It sewed beautifully and has a lovely drape. The Spoonflower fabric wasn't as easy to sew. I made View A, and had to add an annoying 10cm to finish each shoulder as the yard was not quite long enough. I did some excellent pattern matching. I still have to finish the hem tomorrow. I stopped sewing before I made a mistake. 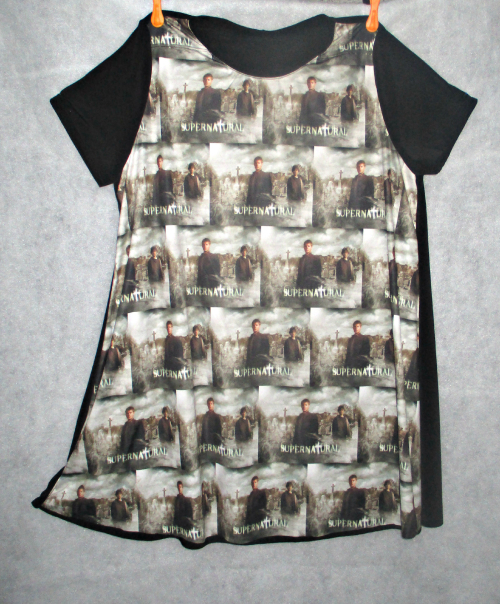 I have been very busy dining out and there will be more dining out tomorrow. I have made chocolate, and boozy gin, fudge and Nutella truffles. It is no wonder I have been tired!! The Labradors and I rested all day on Tuesday after the beach excursion. I think we will rest again tomorrow.

'Old It, SisBoom, Wallop, What A Picture!

I especially put on my new dress this evening to post to my blog!! Yesterday I had a bug and was not very well. Luckily Peri and Gilly are excellent nurses. Today I felt better, but we still slept till 3pm. I have had my usual invalid food of Vegemite on toast and cups of tea, supplemented with fizzy lemon and lime Hydralyte tablets. I find the taste and effect of the tablets to be very good. 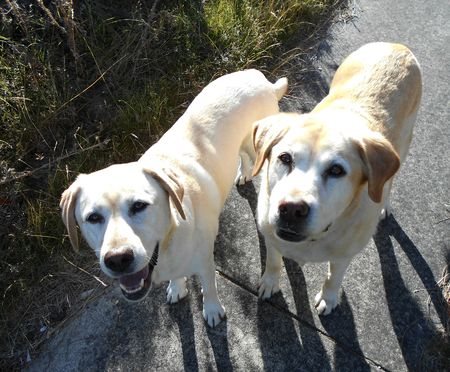 I do tire of Full Bust Adjustments and wanted a simple, cool dress to wear. I searched about on The Internet and chanced upon the SisBoom patterns. I checked out some Jamie dresses and reviews and decided to buy the pattern.

I took a day to make a toile of the bodice and a friend helped me pin and fit it. Then I made a wearable toile out of some old material. I love my new dress!!! And of course there are no photos without Labradors and no, Peri is not smelling Gilly's nether regions, even though it looks like it.

The dress has so many size options and a FBA, but again, I cut a size that was way too big for me. At least it is easier to take in, rather than let out with no extra material. I don't think next time I will do the FBA as there is quite a lot of gathering I don't need. I know, hard to believe. I also took up twice the recommended hem for my height, but I have a long torso and short legs, so I should have remembered that. There is a side zip, which I inserted on the right, so I have to do contortions to get it undone.

One great feature is that you only print out the pattern pieces for the bodice you need, and they are clearly marked, and the skirt is measured on the fabric. I only needed to print out 10 pages and they were very easy to tape together.

I emailed SisBoom to tell them of my dress joy, and had a lovely reply. Patterns are on sale till the 15th of February if you use the code SWOON. That means they are $6 US which works out to about $8 AU. So of course I bought two more patterns: Carolina Mae and Angie. I have done a little knitting and crocheting. I had some Vickie Howell Craft which is cotton and milk fibre so I crocheted and knitted two facecloths. 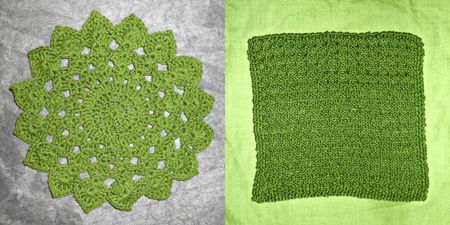 And now I am off to rest again. I have my usual appointment with my GP tomorrow, so if I am not feeling better still, I have a back up plan!!!

If you are unwell on a day when it is 30*C, Peri and Gilly will play in the paddle pool and then dig and lie in their ginormous hole in the garden. Peri looks deliriously happy. It was much cooler today, 24*C, with a nice cool brisk breeze. We were all pretty deliriously happy about that too. 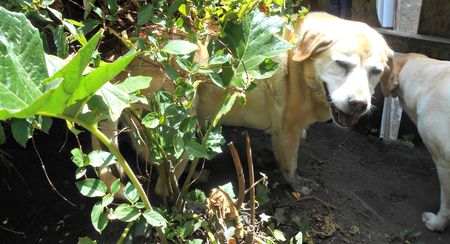 I See Treats Of Cream, Red Roses Too. I See Them Bloom For Me And For You.

Well, it's official: Last year was hot. Our island's three largest cities, including ours, had the hottest day time temperatures since record keeping started and it was the second hottest year. No wonder we were hot!!! No wonder The Labradors have been in the paddle pool. A Lot. 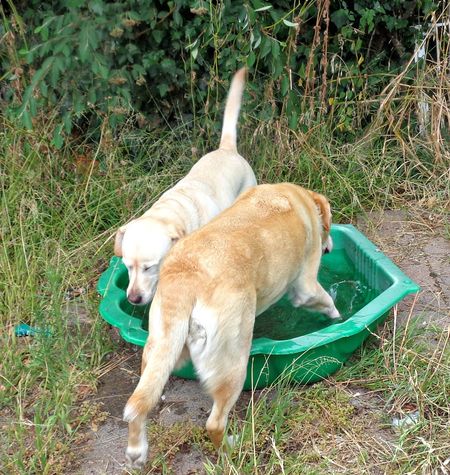 Poor Gilly, Peri was so eager to get into the pool I think that was a bump. And after all that, Peri was not quite getting all the benefit she could have. Just two wet feet thank you very much. Gilly is mid shake, her ears are very long and flippy. 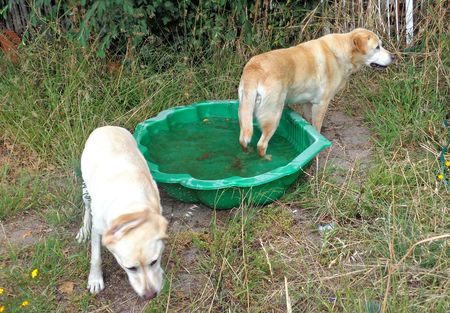 This week we are looking forward to slightly cooler temperatures and rain. I think the up and down weather set off Peri's newly diagnosed arthritis. She was very hoppy on her right front leg. If I rubbed her shoulder she ran off happily. It was noticeable when she got out of bed, or up off the floor after a nap. As she moved around, the limp went away. We saw Dr Gary, who divined that Gilly was there for moral support, and found arthritis in Peri's right elbow. She has some tablets to take for a fortnight, I think there is a positive difference already. I just didn't want her to be in any pain, and I know Labradors are stoic and brave and just put up with things. Dearest Peri. 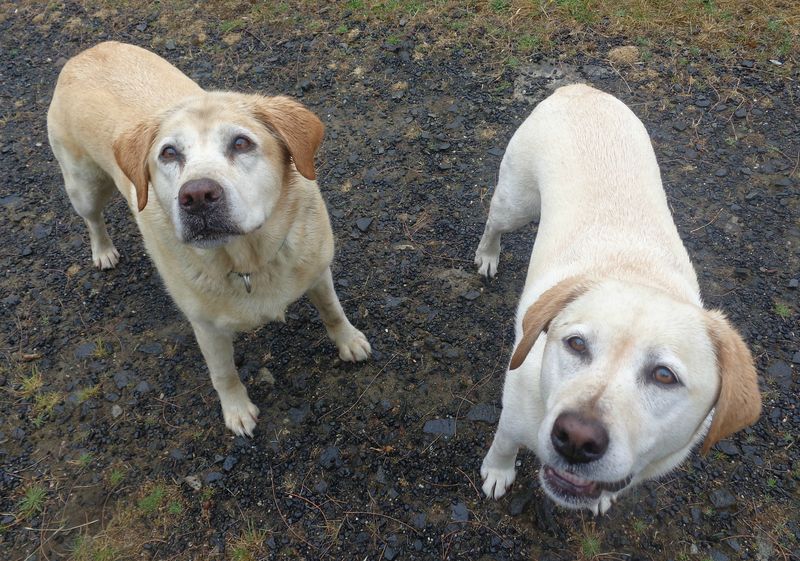 I am not cross about things as much now. So today when I spotted these in the supermarket: I took a picture as a trophy, as if participating in a treasure hunt. First Hot Cross Buns of the year?? Yes, spotted them today. It's like Car Bingo. I think Shell used to give out special bags of puzzles to keep children occupied on long car trips, and there was a sheet of things to cross off whilst looking out the window. So I have ticked off Back to School which started before Christmas, and now Easter. I think Valentine's Day is next on my particular Holiday Bingo card.

I did see some pretty marvellous things at Woolworths. They are selling oddly shaped fruit and vegetables: The Odd Bunch. I bought carrots for The Labradors and I ate some too. I am happy to buy weirdly shaped, too big or too small, fruit and vegetables for a cheaper price. 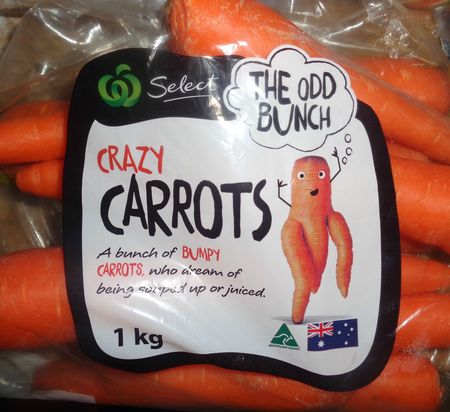 I bought a new dress pattern from The Etsy. It is a more casual style, less fitted and maybe a little cooler than my usual Princess-style bodice. It is the Jamie dress from Sis Boom. I love that even though it is a PDF pattern, I only needed to print out 10/88 pages. I am very happy to save printer ink. There is a three or four day sew-along, so I think I might try that. I have some old sheets to make a toile. 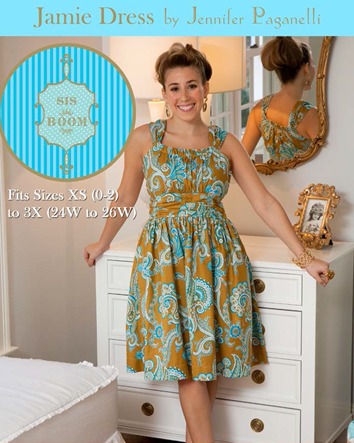 Forty years ago this morning, my sister woke me up to tell me that the bridge had fallen down. I turned over in bed and told her to go away and not to be so silly. She was, in fact, correct. On January 5th, 1975 the Lake Illawarra collided with several pylons of Tasman Bridge at 9-27pm. Sadly, twelve people died, five driving off the broken bridge and falling into the river. The city was divided for almost two and a half years and in the intervening time people travelled by ferry or an Army Bailey Bridge.

I haven't been knitting, but I have crocheted a Dalek Hanging Towel for a gift. It is a kitchen towel. I am not the world's best crocheter, but I learned how to bobble and carry the cotton and crochet over it too, to cut down on the number of ends to be sewn in. I used 8ply instead of 10ply so I fiddled about with the pattern to make it work. And be a decent size too. I ended up crocheting a round of double crochet, just to finish it off nicely. 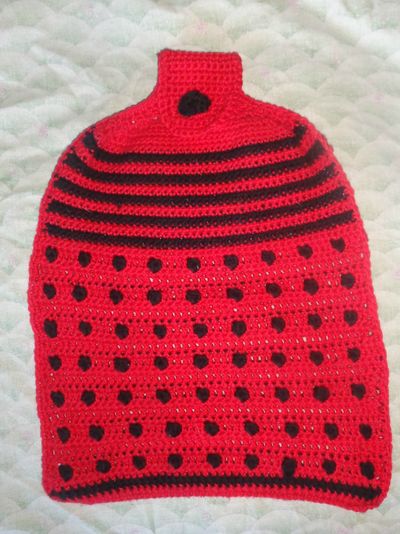 The Jan/Feb Donna Hay magazine is out, and once again it is full of delicious icy treats. I am going to make one for taking to MrsDrWho's house tomorrow night. I am not sure which one. 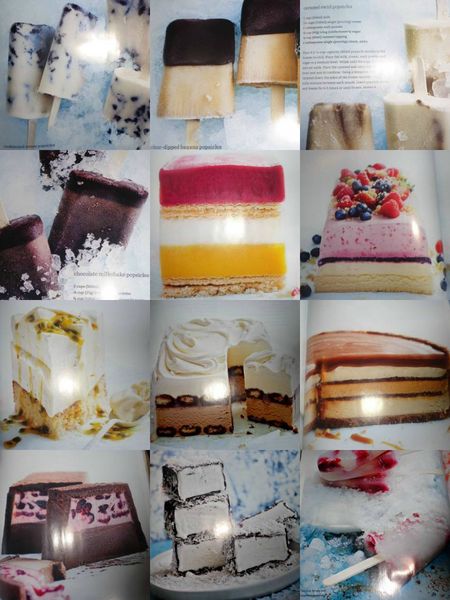 And top to bottom, left to right: (Some are styled popsicles, in Australia we eat ICY POLES)

I think one of the cakes would be easiest to transport. I shall email MrsDrWho and her family ice cream cake photos and see which one they like the best .

The GardyGardeners are not coming this week and so The Labradors will go for an extra walk. I can't bear their loyal waiting at the gate, softly crying - well woofing really on Gilly's part really, to no avail.

The temperature has dropped and there is a gentle cool breeze. Time for a cup of tea and maybe an early night.